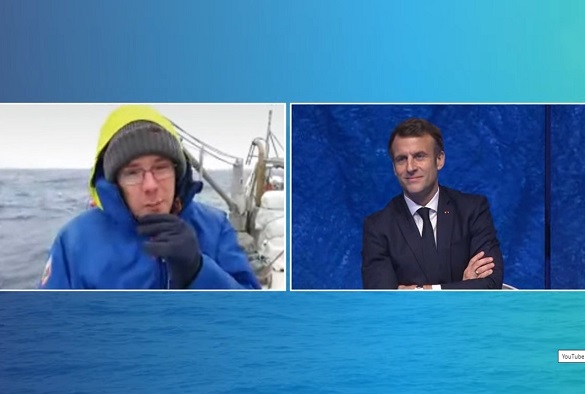 University of Liverpool ocean scientist Professor Alessandro Tagliabue spoke directly to world leaders today, including French President Emmanuel Macron, about  the research he is currently undertaking in the Antarctic Ocean and the urgent need to protect the area from the threat of climate change and exploitation.

He spoke via Zoom to the One Ocean Summit,whose audience included President Macron and John Kerry, the US special presidential envoy for climate, from the Weddell Sea where he is the chief scientist on board the laboratory-schooner Tara as it undertakes the Antarctic leg of the ‘Mission Microbiomes’ expedition.

Professor Tagliabue said: “We are right now in the Weddell Sea in Antarctica at a latitude of around 64 degrees south.We are sampling in the Weddell sea to understand how the changing environment affects the functioning of the microscopic marine microbes that form the base of the food chain. Antarctic ecosystems are unique.

"We need to come here to this tough environment to obtain the knowledge necessary to deliver the improved predictions regarding the effects of climate change.

The three-day One Ocean Summit, taking place in Brest, France, aims to mobilise the international community to take tangible action towards preserving and supporting a healthy and sustainable ocean. Attendees include Heads of State and Government, leaders of multilateral institutions, business leaders and policymakers.

You can watch One Ocean Summit, chaired by President Macron, on the video below, Professor Tagliabue's interview is from 18 minutes:

Professor Tagliabue is part way through leading a five-week expedition on board Tara as it voyages from King George Island through the Weddell Sea and back across Drake Passage to Chile.

The ‘Mission Microbiomes’ expedition aims to shed light on how climate change may affect the structure and function of marine microbiome, with implications for the response of ocean ecosystems and its role in regulating climate.

Tara (below) is a 36-meter research schooner that undertakes expeditions to learn more about the world’s ocean and outreach towards the broader public, youth and policy makers. She has been owned and deployed by the nonprofit Tara Ocean Foundation since 2003.

The Tara Ocean Foundation is the first public interest foundation in France dedicated to the Ocean. They carry out innovative and pathbreaking scientific research in collaboration with international laboratories of excellence to explore, understand and anticipate changes occurring in the Ocean associated with climate and environmental risks.