Michael Doser is a research physicist at CERN, the European Center for Nuclear Research in Geneva, Switzerland, who has specialized in working with antimatter, using it either as a tool (to study the strong interaction), or as an object of study itself.

He is currently focusing on the formation of anti-atoms, the search for an explanation of the matter-antimatter asymmetry, and the measurement of the gravitational interaction between matter and antimatter, and is the spokesperson of the AEgIS experiment at CERN.

In addition, he lectures on antimatter, and is editor of Physics Letters B and of the Review of Particle Properties. He is also involved in numerous outreach activities, both locally and internationally (Europe and Asia), speaking to a wide spectrum of non-specialist audiences, from school children to decision makers, often also at art-related events. 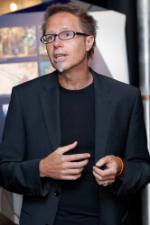