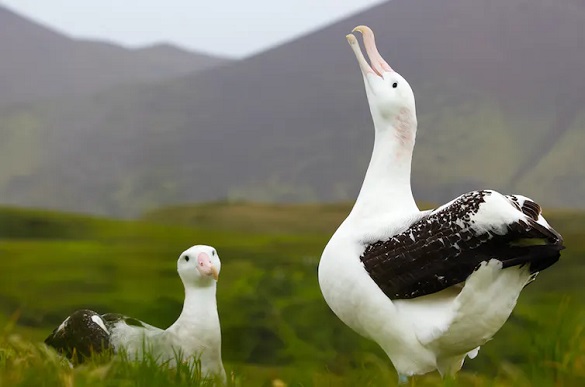 This article by Dr Samantha Patrick, from the University's School of Environmental Sciences, was first published by The Conversation.

Monogamy is widespread among birds and it is well known that many seabird species mate for life. Famous examples include charismatic penguins and albatrosses which are often portrayed in the media as the perfect couples. But this romantic trope doesn’t tell the whole story.

Research has shown that up to 24% of wandering albatross chicks are reared by a male who is not their genetic father and this can be up to 31% in some penguin species. Not quite the tender idyll we are led to believe.

Seabirds are long-lived, with wandering albatrosses known to live for over 60 years. Their long pair bonding phase, accompanied by complex courtship dances, would make you think break ups should be rare. However, there is growing evidence seabirds do “divorce”.

In our new study we showed 13% of wandering albatrosses born on the remote Indian Ocean Crozet Archipelago divorce during their lifetime because of low numbers of females – and the actions of certain agressive males.

Sometimes birds split up to find a better mate. How birds assess mate quality is not fully understood. But it may be about age and behavioural traits the birds can observe. This is called adaptive divorce and has been noted in some seabird species before such as penguins.

But in our study something different was happening. Unlike some other birds divorce did not tend to increase the number of young a wandering albatross reared and didn’t seem to give them evolutionary advantages.

In the population we studied, couples were driven apart by what’s called forced divorce. This is where one bird, likely the males in our study, breaks up a bonded pair.

This was the first study in the wild which looked at behavioural characteristics such as aggression of these kind of “homewrecker” males.

Personality is well studied across the animal kingdom, from anemones to elephants. We know that seabirds have different personalities, linked to their foraging behaviour and reproductive success.

Personality is defined as a consistent individual difference in behaviour and is measured using traits such as boldness, neophobia (fear of new things) and aggression.

In wandering albatrosses, we measured personality in two different ways. The first is what is called a human approach, where a person walks towards a bird incubating an egg on the nest and records its response. Males and females share incubation duties and both sexes can be tested in this way. The birds nest on marshy land so the tester had to wear snow shoes to avoid sinking.

We also tested how the birds responded to a novel object, in this case Betsy the space hopper cow. Unfortunately for Betsy, while the personality differences persisted among different birds, the albatrosses were all much more aggressive towards her. Betsy did not survive an attack late in the season when a particularly bold bird ripped her open.

The albatrosses ranged from shy ones, who showed no response, to dauntless types that stood up and called out. Bold females were no more likely to divorce than timid ones. However, shyer males had higher divorce rates suggesting that bolder males may be forcing timid males out of pair bonds.

Unpaired females are rare. The Crozet albatross population is male skewed because more females die trapped in fishing equipment. Males and females have different hunting strategies that change throughout their life. For instance, as males mature, they move increasingly further south to Antarctic waters. Females stay in subtropical waters throughout their lives, and forage areas further north.

In a previous study we showed divorced wandering albatrosses do not have more chicks so females are unlikely to benefit from seeking new mates. This supports the theory that wandering albatross pairs are not choosing to divorce. Instead, it seems to be a few rogue males who are ending the partnerships of these otherwise monogamous birds.