This led to an MRC competition, and the award of two schemes, one of which was a partnership between the University of Liverpool and the University of Manchester:  The North West England MRC Clinical Research Training Fellowship Programme in Clinical Pharmacology and Therapeutics.  The Programme involved 4 industry partners, Astra-Zeneca, GSK, ICON and the Medicines Evaluation Unit, in order to ensure that training of all fellows had both academic and industry input (“without walls training”) into their projects.

Nature of the scheme

The scheme was designed to support Clinical Fellows working in paediatrics, infectious disease or inflammation and repair, whose research had a focus on either drug safety or stratified medicine (see figure). These themes were chosen as they were, and continue to be, areas of importance to the NHS and of strength across the two universities, and because they align well with research training in clinical pharmacology and therapeutics. Fellows were able to work across the two universities (with joint supervision) in order to access world-class expertise and state-of-the-art facilities. The support provided by the commercial partners enabled the fellows to develop projects jointly with Industry, access (with support from the Industry partners) generic skills that may not be available in academia, and to develop collaborations in the short- and long-term. 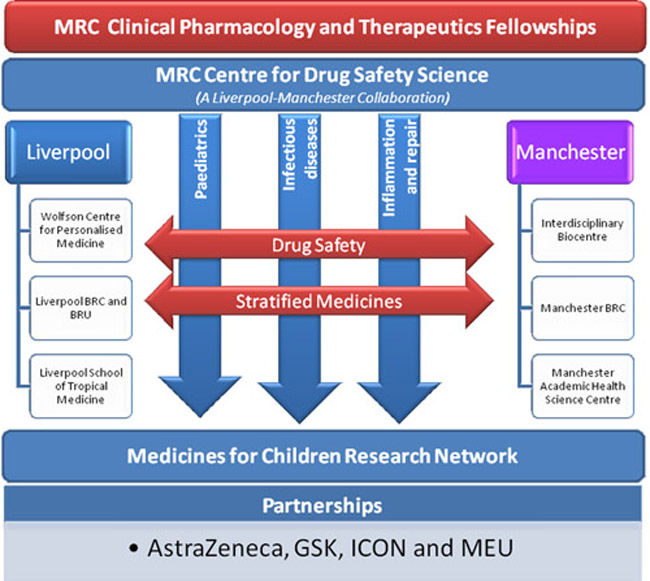 The Scheme recruited 13 fellows by identifying early career clinicians who demonstrated a strong aptitude for research with the potential to become the leading clinician scientists of the future. Most Fellows have now gone on to begin Academic Clinical Lectureships or are working toward Clinician Scientist awards.

In addition to the specific research and transferable skills obtained by the Fellows, all of them had 2-monthly teaching sessions that covered core knowledge in clinical pharmacology in accordance with the curriculum approved by the Joint Royal Colleges of Physicians Training Board (JRCPTB) and GMC.  As well as covering the topics identified in the JRCPTB curriculum, Fellows took an active role in identifying their own learning needs, suggested specific topics, and took part in planning and organising teaching days. These teaching sessions were delivered by multiple stakeholders including academics, healthcare professionals, industry partners, regulators and lay professionals, with some sessions being held on site at either AZ (Alderley Park) or GSK (Brentford).  These sessions were popular, attracted excellent feedback scores, and provided the core knowledge that helped the fellows in their specific research projects. The sessions were also attended by industry trainees. Overall these teaching sessions increased the interactions amongst the Fellows, and also the interactions between the Fellows and industry personnel. We had excellent engagement with external stakeholders who recognise the value of developing a workforce that has clinical pharmacology training. For example, the MHRA organised 2 full day sessions in London that included all section heads from the MHRA, one of which was chaired by Prof Sir Kent Woods (CEO at the time).  The British Pharmacological Society also ran a two day PK/PD workshop in Liverpool for the Fellows, the first time it had been held outside London.

Industry representatives have been intimately involved in the scheme from its inception.  From a generic perspective, they: have taken part in all selection interviews; are an integral part of the programme management board; and have had input into the development and delivery of the teaching programme.

In terms of specific project-related interactions, this varied according to the type of project.  All Fellows gained exposure to industry which included collaborative working on new technologies with GSK or AZ and the undertaking of phase I studies with ICON.  Overall, the industry representatives have been highly enthusiastic about their involvement in the scheme and believe there are significant benefits from having done so.

One of the long-term intentions of the scheme was that the Fellows would form their own collaborations with industry.  This is now beginning to happen; for example one Fellow is currently spending one year as a postdoctoral fellow at GSK before returning as a clinical lecturer.

From the start of the programme, it was important that the Fellows involved patients and engaged with the wider public in relation to the research they were undertaking.  At an individual level, most Fellows involved patients in their research either through working with existing patient groups in assessing protocols and patient information leaflets, or through close work with the patients who agreed to take part in their studies. Fellows were also able to respond to requests from patient groups and charities to create information pamphlets or to make contributions to newsletters about specific aspects of different conditions and several took part in awareness events (e.g. brain infection and psoriasis).

Fellows also took part in a broad range of public engagement activities on an individual basis. Many of them took part in activities aimed at promoting science and research careers to the next generation by giving careers talks at local schools, hosting A Level students in the lab, and engaging with groups such as Junior Café Scientifique and Science Girl (of which one Fellow was a founding member). Fellows also took part in community open days hosted by their respective departments, wrote blogs about their work, made videos about their experiences as PhD students and spoke on local radio. As a group the Fellows have also taken part in the annual Manchester Science Spectacular and were able to support the MRC’s open week in its Centenary year. Further to this, the scheme was central to supporting ‘Women in Science Edit-a-Thons’ at both the Universities’ of Liverpool and Manchester in collaboration with their respective Athena Swan teams.

13 excellent Fellows were recruited to the programme and are already beginning to have significant outputs.

In addition, Fellows engaged with 63 NHS trusts for recruitment of their patients, and initiated collaborations worldwide. A network diagram illustrates the connections made by the Fellows.

Most of the Fellows intend to return to clinical training to complete their CCT (certificate of completion of training).  Of those who have been awarded PhDs, 8 have been awarded clinical lecturerships, 2 are going to apply for lectureships in the near future and one has applied for a MRC clinician scientist post.  In summary, the scheme has had significant outputs in the short term, and this is likely to lead to longer term impact in terms of collaborative working with industry, increasing experimental medicine research and increasing the capacity in clinical pharmacology in the UK.

Back to: North West England MRC Fellowship Scheme in Clinical Pharmacology and Therapeutics