The 12th International Particle Accelerator Conference (IPAC’21) was held from the 24th to the 28th of May earlier this year. IPAC is the main international event for the worldwide accelerator community and industry where attendees present and discuss cutting-edge accelerator research and development results and gain the latest insights into accelerator facilities across the globe. Among the nearly 2000 contributions was work presented by five students in the LIV.DAT CDT working on a diverse range of accelerator-related topics, from enhanced diagnostics in the Large Hadron Collider to optimization of novel acceleration methods. Due to the COVID-19 pandemic the conference was held entirely online for the first time in its history, bringing both new benefits and challenges to those attending with pre-recorded poster presentations and hundreds of concurrent Zoom rooms during the conference.

Gyanendra Yadav presented a poster on his simulation study for a Dielectric Laser Accelerator (DLA) operated by a CO2 laser. His study, using particle-in-cell simulations in VSim, emphasized the advantage of using a higher wavelength CO2 laser over conventional near-infrared lasers to increase charge transport capacity and energy gain. On the new format, Gyanendra said “The online mode of the conference had ease of accessing the talks and contents without any constraint of time. However, the overlap of similar topics in the same live sessions as of my poster's became a little restrictive to me in connecting with few presenters. Overall it was fruitful with interesting discussions and questions of a wider variety because of a huge attendance.” 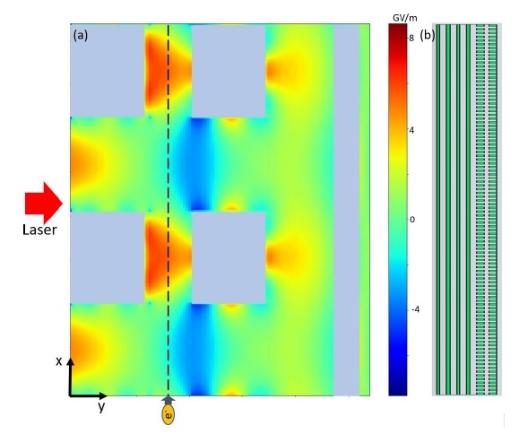 Monika Yadav presented an extensive portfolio of four posters on her research, in collaboration with research teams at UCLA and SLAC. These included a contribution which discussed planned plasma acceleration experiments at FACET-II that will use ‘betatron’ radiation to provide single-shot non-destructive beam diagnostics, modelling the radiation using numerical methods and validating against analytical results. In another, she showed, via particle-in-cell simulations, the formation of a quasi-equilibrium between plasma ions and electrons in a previously unexplored ‘flat’ beam, discussing its relevance to future linear colliders. Monika also contributed an optimization study for the nozzle geometry of a gas jet and possible diagnostics of the interaction point of the jet with a free electron laser in the development of a new X-ray laser oscillator at SLAC. Finally, she presented a simulation study of high-power terahertz radiation from a beam driven dielectric wakefield accelerator, optimizing antenna geometry, dielectric material choice and particle beam parameters to maximize radiation output.

Félix Soubelet’s poster was on local linear coupling correction in Interaction Regions (IRs) of the Large Hadron Collider at CERN in Switzerland. Due to constraints in the IRs, typical optics observables needed to inform corrections cannot be reconstructed. He presented simulations made with the MAD-X code showing that settings minimizing the global coupling |C-| while applying a rigid waist shift will also minimize quantities pertaining to local linear coupling, allowing for an operational setup for correction determination during the machine's commissioning. Felix said “The conference being fully held online was a challenge to overcome for both organizers and participants. While the format in theory would let anyone access all talks, it ended up requiring a high investment from attendees to research and view ahead of time all interesting talks, something that would happen organically on the spot in a classic format. Nonetheless, there was opportunity for fruitful discussions and social interactions through rooms dedicated to different presenters.” 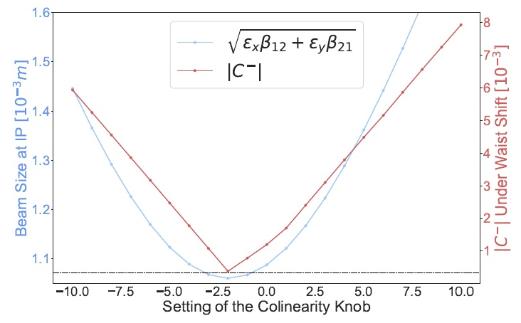 This figure from Felix’s poster shows the resulting |C-| and IP1 beam size for various powering of the skew quadrupole correctors. The black dotted line represents the threshold of a 1% beam size increase from the nominal scenario.

Selina Dhinsey presented a poster on her research, which analyses and models the Comet Assay; a biological technique for determining DNA damage levels in individual cells. The Monte Carlo model created by Selina to produce simulated assay images will allow for the training of a Mask Regional Convolutional Neural Network (Mask R-CNN). This network allows the exploration of the differences between analyzing comet images using traditional image analysis techniques and implementing instance segmentation through the Mask R-CNN. On her experience, Selina said “I liked the discussion and social threads as it allowed more interaction as well as the job boards where institutions and organizations were able to post openings for the audience to see.” 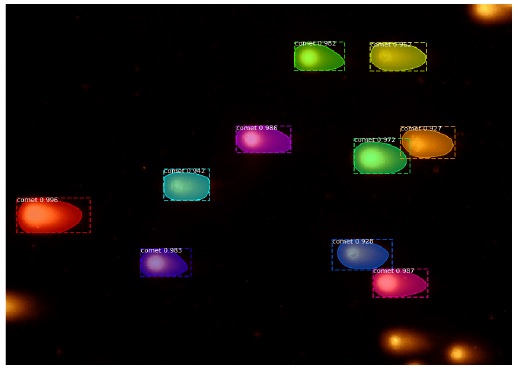 This figure from Selina’s poster shows a comet assay image overlaid with the bounding boxes and segmented masks the model has defined.

Aravinda Perera’s poster presented work on the effects of asymmetry in the seeded self modulation (SSM) of long proton beams in plasma, a process that is crucial to the AWAKE experiment at CERN. He showed that semi-analytical results from an envelope model using linear plasma wakefield theory of an asymmetric beam undergoing SSM can be used to reproduce key features of early-stage beam profile evolution in highly computationally intensive 3D particle-in-cell (PIC) simulations. The model was further used to obtain a scaling law for the effect of asymmetry on the modulation growth rate showing close agreement with PIC simulations. The results have potential to inform upcoming experiments at AWAKE and those using similar schemes.

LIV.DAT was further represented at the conference by Centre Manager Dr Theun van Veen who was involved in the University of Liverpool’s exhibition stand. This virtual stand also showcased the research conducted by the QUASAR Group, a leader in accelerator science research, management and training, carrying out world-class investigations in beam dynamics, novel accelerators, and innovative applications. Theun said: “The stand at IPAC’21 was an interesting opportunity to show the delegates about LIV.DAT’s research excellence in Big Data Science. With many delegates visiting our stand, I believe that our Project T.E.A.M. has done an excellent job in presenting the Centre to the global accelerator community and industry.”

For anyone who has registered for IPAC’21, the posters can be viewed via this link.