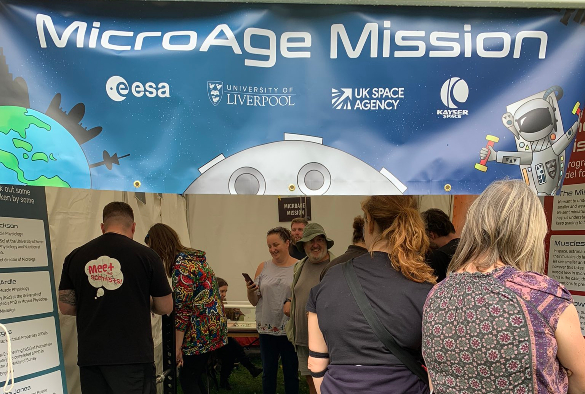 The University's MicroAge outreach team report back from their recent visit to the Bluedot Festival.

"We had the pleasure of hosting a stand in the space camp area at Bluedot in July. We were kept busy showcasing our research on microgravity and age-related muscle loss, demonstrating exercise countermeasures and engaging with science enthusiasts of all ages for three, fun-packed days.

The MicroAge Mission was a UK Space Agency (UKSA) funded national mission to the International Space Station (ISS), performed in December 2021. Lead by Professors Malcolm Jackson and Anne McArdle, the study used lab-grown muscle constructs, housed in bespoke flight hardware, to understand if muscle loss in spaceflight is similar to that seen in ageing on earth, only faster!

The stand featured colourful visual displays of the recently launched mission, including projections of European Space Agency astronaut Matthias Maurer handling the flight hardware on board the ISS. The same hardware was also displayed for all to see, complete with exploded views of the internal components and a team of enthusiastic researchers on hand to explain the complexities of performing biological research in space. Members of the public were also given the opportunity to examine some real muscle sections under a light microscope.

Like any group of scientists, we couldn’t resist collecting some ‘data’ at the festival. The stand featured two activities that required some significant audience participation! Festival goers were asked to measure their grip strength using a dynamometer and perform an isometric mid-thigh pull to measure their leg strength. These data points were plotted against the participant’s age to demonstrate that, after the age of 30, muscle mass and strength tends to naturally decline. This contributes to frailty in old age, increasing the risk of falls and injury. However, exercise training can have a positive impact.

It wasn’t all work and no play however, highlights from the weekend included talks from British astronaut Tim Peake, UKSA human exploration programme manager Libby Jackson and British physicist Jim Al-Khalili. We were also able to enjoy musical performances from the likes of Mogwai, Groove Armada and Bjӧrk.

The MicroAge team is committed to promoting the dissemination of research findings through public outreach events, raising the profile of the research that is conducted at the University of Liverpool to a wide audience and we would like to thank the funders, particularly UKSA for this amazing opportunity."