‌On 24 July 2018 Olivier Sykes (HI Impact Fellow and Geography and Planning) and Mark Boyle (Director of the Heseltine institute) were the speakers at a seminar event in the Ministry for Housing, Communities and Local Government (MHCLG) in London.

Prof. Boyle then introduced the Heseltine Institute and highlighted its outward facing role as an interface between academic work on local growth and sustainable cities and recent work which it has undertaken on the inclusive growth and development of the Liverpool City Region.

Dr. Sykes then presented an historical overview of the emergence of regional policy in the UK from the 1930s onwards, emphasising the key role that British politicians and interests had also played in the emergence of European regional policy and the impacts this has had on countering uneven development and managed decline in Britain’s regions since the 1970s. 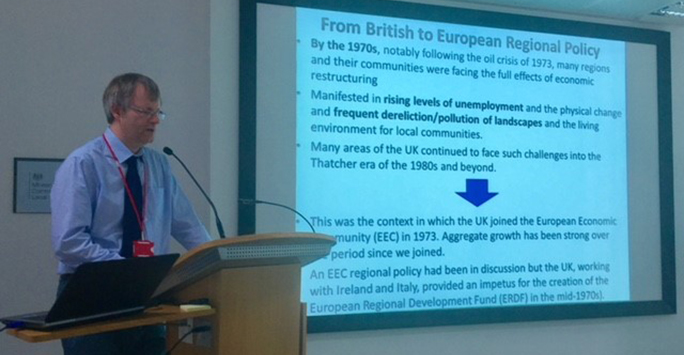 Dr. Sykes outlined the evolution from British to European region policy and the UK role in this evolution

The seminar ended with an open discussion and Q&A session which focussed on current and future challenges especially the changes and uncertainties wrought by the possibility of the UK leaving the EU. This discussion – joined by teams dialling-in from other regions, allowed a two way exchange with an emphasis on particular challenges such as how to foster both productivity and inclusive growth a key theme of interest to the HI.

Back to: Heseltine Institute for Public Policy, Practice and Place