The effectiveness of typical helicopter missions like Search and Rescue or transport missions are highly dependant on the ability to fly the aircraft at any time. One critical issue is the Degraded Visual Environment (DVE). The DVE encompasses reduced visibility due to weather conditions (e.g. rain, fog) and near zero visibility if it happens to be a dark night. In such a situation the pilot misses important visual cues pertaining to their flight trajectory. Pilot workload increases significantly, and safety is endangered (especially in Near Earth operations). The cueing deficit must be compensated with a higher level of helicopter stability and/or by using a pilot vision aid.

Active Control Technologies can be applied to provide the required level of Handling Qualities by means of Advanced control laws on fly-by-wire or fly-by-light helicopters. These concepts include the ‘Attitude-command (AC), the ‘Transitional-Rate-Command (TRC)’ and the ‘Positional-Command (PC)’ for hover.

Operations in reduced visibility or by night are made possible by using vision sensors like Night Vision Goggles (NVG) or Forward Looking Infrared Radar (FLIR). These sensors utilise artificial vision to improve the cues available to the pilot. Advanced displays that allow low workload Nap-of-the-Earth flight (NoE) are not yet available. Current sensor technologies cannot yet compensate for all the cueing deficiencies, and hence the DVE has a degrading effect on Handling Qualities.   Insufficient work has been completed to date to analyse handling qualities in a degraded visual environment. The Aeronautical Design Standard for military helicopters ‘ADS33’ proposes an approach to deal with this problem. However, this approach needs to be tested,evaluated and improved if necessary

To apply and evaluate the existing ADS33 specifications in DVE. Firstly, in a piloted simulation environment, and then in a real situation during flight tests.

The DVE is a facet of the Usable Cue Environment (UCE). The UCE ‘to date’ is primarily used in helicopter mission design to ascertain the required Response Types for hover and low speed near earth operations (Figure 1).

The Degraded Visual Environment encompasses the upper (poor) end of the UCE scale. 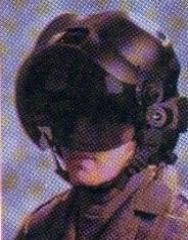 Safe operations in DVE can be made possible by using Vision Aids to synthetically improve the visual cues. Vision aids may be provided to the pilot through multiple channels; helmet visor (Figure 2), cockpit panels, head-up and head-down displays. Such vision aids should work in harmony with existing systems like overlaid symbology, and should remain simple to prevent information overload.

Firstly; In order to create a ‘Good’ visual aid that would present all the necessary information to the pilot, it is of paramount importance to understand how pilots use visual cues to manoeuvre the aircraft. Here, A time-to-contact (temporal) method is preferred over a distance-to-contact (spatial) representation of the environment external of the aircraft.

VISUAL PERCEPTION IN FLIGHT CONTROL Pilots guide the aircraft by seeking out visual information from optical flow on the surfaces over around around which they fly via a process called ‘Optical Looming’ (Figure 3). This information provides for a technique known as Tau-coupling (Equations 1 and 2).

Is referred to as ‘the Instantaneous time-to-contact or encounter’

Ratio of Distance to velocity = The Instantaneous Time to Reach the viewpoint (Tau is a fundamental optical variable that has evolved in nature.)

General Tau-theory applies to gap closure using any form of sensory input. The pilot picks up information from the visual scene, allowing them to co-ordinate and synchronise motions. This synchronisation is achieved by keeping the Taus of the motion gaps (say X and Y) coupled in constant ratio (Figure 4).

Activated in situations where there is a single dominant gap. Closure of a single motion gap is controlled by keeping the Tau of the motion gap coupled to an intrinsically generated Tau-guide.

1.  Quantify visual information that Pilots use for performing Manoeuvres from a Tau-based perspective.

2.  Examine how pilots cope when they are removed, up to the point where safe flight is unattainable i.e. beyond UCE 3. Such degradation will be reflected in the correlation of the Taus of the motion.

3.  Design synthetic world where Tau-coupling is restored and once again coherent (in effect, synthetically improving the UCE).