The aims & objectives of the University of Liverpool's contribution to OPTIMAL were focussed on developing further understanding of the flight dynamics of rotorcraft in wake vortex encounters, especially in the context of the new OPTIMAL rotorcraft procedures. This was to be acheived through the development severity metrics and criteria through piloted simulations. Also tools were developed to predict the likely severity of an encounter and to perform parametric analyses of Wake Vortex Encounters (WVE). The results from this analysis have been combined with a study of wake vortex decay and transport behaviour to make recommendations for the safety case for future Rotorcraft Simultaneous Non-Interfering operations. 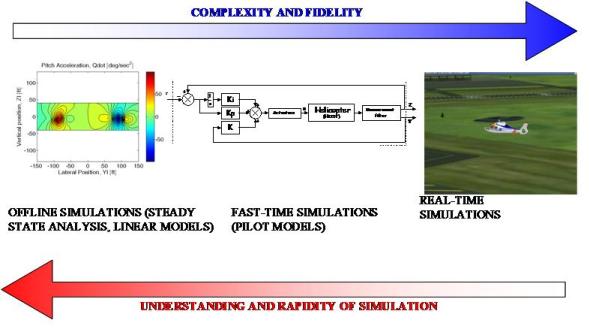 The research has used a number of modelling and simulation techniques to help answer the challlenges posed by the OPTIMAL objectives. The philoshpohy has been to use a number of complimentary analyses that cover the spectrum from the piloted simulations (complex but perhaps more difficult to interpret) to the analytical approximations that are fast to compute and can cover many scenarios but sacrifice fidelity to acheive this. The figure to the right illustrates this concept and shows the tradeoffs and agains that each approach offers.

The following subheading provide an overview of the different research areas this work has covered and shows a number of results and typical data acquired.

Wake Vortex Behaviour and its potential impact on SNI operations:

As well as investigating the flight dynamic response of a rotorcraft to a wake vortex through simulations, the hazard of a wake vortex encounter has to be considered within an overall framework of ‘risk’ i.e. how likely is the occurrence of a wake vortex encounter of a given severity. Primarily, this issue demands the ability to predict or measure the transport and decay of wake vortices i.e. where are they and how strong are they.  What makes this problem particularly complex is that, for each airport, a proposal for SNI operations is going to have its own unique characteristics. There will be a different set of prevailing wind trends, atmospheric conditions, runway and rotorcraft FATO locations and flightpath positions, all of which change the SNI risk outlook.

Comparing against 250m ICAO annex 14 criteria, results in published sources have shown wakes measured travelling laterally up to 429m (1407ft) [1]. The need to consider wake vortex evolution requires understanding of the wake transport and decay, the effect of atmospheric conditions and winds whilst SNI operations allow for almost infinite combinations of wake generater aircraft and encountering rotorcraft as they are completely independent of each other. 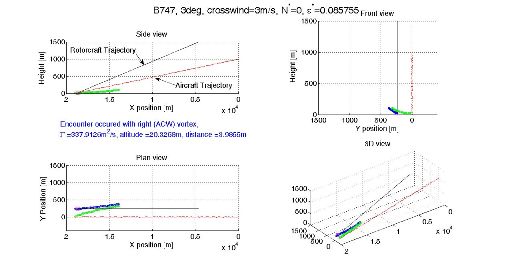 Demonstration of the UoL P2P model showing an encounter of a wake vortex generated by an aircraft encountering with the flightpath of a parallel helicopter flightpath.

As well as researching the published measured data, the research project has developed a version of the P2P  ‘Probabilistic 2 Phase’ model [2]. This phenomenological model  can model wake vortex decay and transport based on combination of empirical and physical relationships using inputs such as the background turbulence level, sratification, winds and the initial vortex height and strength. This has helped to guide the recommendations for SNI operations and to cast the risk of the likelihood of the occurence of encounter against the severity of an encounter.