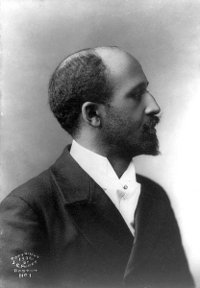 William Edward Burghardt Du Bois (February 23, 1868 – August 27, 1963) is one of the most important figures in black Atlantic history and American thought in the twentieth century. He was a civil rights activist, author, professor, historian, Pan-Africanist and editor. Achieving  a Ph.D in History, he was the first African American to graduate from Harvard University, following which he became a professor at Atlanta University. He became increasingly prominent in society for his challenges of the existing popular ideas of Booker T Washington, who promoted an accomodationist strategy leading to debates about leadership, populism and how best to advance the race.

Du Bois’ great intellect led him to becoming a key authority in articulating the issues of race in a rigorous, and scholarly way. This was particularly important in gaining the attention of educated white Americans, which was a crucial tool in creating change. However, it can be argued that this elitism, combined with his mixed race heritage alienated much of the black population. Indeed, central to his strategy was the idea of the ‘Talented Tenth’ of the population who would be responsible for representing the entire race.

He was the only black founder of the civil rights group the National Association for the Advancement of Coloured People (NAACP) in 1908 which put him at the forefront of the civil rights movement. Along with this he also edited the group’s newspaper, Crisis which, as the premier publication for black Americans, had a monthly circulation 100,000 at its peak. Therefore it gave Du Bois an independent editorial platform to a significantly large audience.

Du Bois wrote and published more than 4,000 articles, essays, and books. One of his most significant publications is The Souls of Black Folk, first published in 1903 which discussed different themes, in a fusion of fiction and autobiography. Issues such as the ‘color-line’ and ‘double-conciousness’ were identified and explored. James Weldon Johnson said the books impact was “greater upon and within the Negro race than any other single book since Uncle Tom’s Cabin”. It has often been seen as the manifesto of the Harlem Renaissance. It offered revolutionary ideas about how African Americans should fit into society.

W.E.B Du Bois is considered to be a central figure of the Harlem Renaissance movement; a forefather and mentor. Indeed David Levering Lewis has stated that his mobilising role was ‘indispensable’. Crisis was important in introducing many artists and writers to both the black and white population by first bringing their work to the attention of its readers. Furthermore, Du Bois was personally a mentor and supporter to many key figures such as Jean Toomer and Langston Hughes. In 1926 he attempted to set the black aesthetic in his essay ‘Criteria of Negro Art’, demanding that the work of African Americans be appropriate to their culture and should be judged by their terms and concepts too.

He recognised that art and literary work could be a powerful weapon and so believed that all art should be propaganda in helping African Americans gain respect and status. He famously said, ‘I do not give a damn for any art that is not used for propaganda’. Du Bois had a specific, controlled way in which he wanted the movement to work. However, as Darwin T. Turner argues, ‘He could identify the substance of the art but not the spirit.’ Those who he deemed to be misrepresenting the race by not portraying them as he wanted, were criticised greatly through the medium of Crisis- most prominently Countee Cullen and Claude McKay.

Du Bois had Atlantic and global connections: he visited Nazi Germany, Japan and China and publicly commented on their political situations, most often with a focus on the issues of race. He was also a great advocate of Pan-Africanism- hosting the 5th Pan-African Conference in Manchester, England in 1945. In his later life Du Bois became increasingly leftist in his political beliefs. Eventually he was completely disillusioned by the United States of America leading him to join the Communist party and move to Ghana in 1961 and soon after renounced his American citizenship.