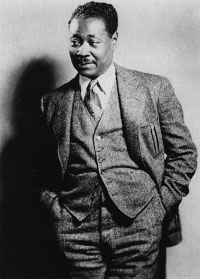 The author and poet Claude McKay (September 15, 1889- May 22, 1948) was born in Jamaica and moved to the US in 1912. He was one of the earliest literary contributors to the Harlem Renaissance and also one who refused to conform to either Alain Locke or W.E.B Du Bois'  framework. His work includes the controversial best-seller Home to Harlem (1928) which won the Harmon Gold Award for literature and the poems The Harlem Dancer (1917) and If We Must Die (1919). His style of writing was gritty, portraying realistic accounts of the urban life of African Americans. He was also Co-Executive Editor of Marxist journal, The Liberator until 1922.

McKay had strong views which he was extremely vocal about. For example he rejected the Harlem Renaissance movement, stating in 1930 that it was a ‘hopeless mess’ and he advised young aspiring black artists ‘to get as far away from it as possible’. He called Alain Locke’s New Negro essay ‘a remarkable chocolate soufflé of art and politics, with not an ingredient of information inside’. Furthermore, whilst he was proud of his heritage and culture and celebrated it in his own way, he thought there should be no regulations to the art he produced: He did not believe in a moral obligation to ‘his race’ or in using art as propaganda.

McKay’s beliefs and statements unsurprisingly caused tension with key figures of the Renaissance. He asserted that African American’s were being too sensitive about what they could and should write about, his characters included prostitutes, pimps, and criminals. This was criticised by W.E.B. Du Bois, who regularly referred to him as a bad example in Crisis, stating that McKay had ‘used every art and emphasis to paint drunkenness, fighting, lascivious sexual promiscuity and utter absence of restraint in as bold and bright colours as he can’.

Home to Harlem is McKay’s most famous and most controversial book. Du Bois famously reviewed it, concluding, ‘For the most part it nauseates me, and after the dirtiest parts of its filth I feel distinctly like taking a bath’. Home to Harlem was an exploration of black culture. The two main characters are Jake and Ray: Jake is driven by the pleasures in life and; Ray is a privileged, educated writer from Haiti, finding he does not fit in in the white world, or in the world of Jake. Whilst it was written off as sensationalist by some, big contemporary issues were discussed.

McKay however, stated that he did not want it to be seen as just another ‘race problem’ novel. His depiction of the lives of Harlem inhabitants was not out of disrespect but in fact a close affection to the place. As Tyrone Tillery argues in his biography, moving there from the West Indies McKay stated that he was immediately enthralled by ‘their spontaneous ways...the physical and sensuous delights, the loose freedom’ and felt it was his real home. Like Zora Neale Hurston, he faced praise from the white press and criticism from the black. He referred to the reaction and resentment of the black intelligentsia as ‘general, bitter and violent’.

John Maxwell argues the clash between Du Bois and McKay represents the ‘fault line’ of the renaissance; the split between the ‘Talented Tenth’ and the succeeding Negro Renaissance from 1926. Maxwell argues that this era of the Renaissance became more dominated by artists than politicians, meaning McKay had an important role as the figurehead of the freethinking artists of the movement. Tyrone Tillery blames the bad reception of Home to Harlem on the climate of the Harlem Renaissance: Carl Van Vechten’s Nigger Heaven had recently started hot debates, particularly ‘How Shall the Negro be portrayed?’, which was a long drawn out discussion between many leading figures of the movement.

Relocating regularly throughout his life, travel became a central element of McKay’s existence. Upon leaving Jamaica, he initially attended Booker T. Washington’s Tuskegee Institute. In 1914 McKay left for New York City. Although most of his work was focused on Harlem, from 1922 he lived abroad. Initially he went to the Soviet Union to attend the Third Communist International, but he also lived in Europe, particularly Paris, and North Africa. Whilst he had communist views early in life, he was disillusioned after his visit to the Soviet Union and was never part of a communist party. He eventually converted to Catholicism after returning to Harlem in 1934.