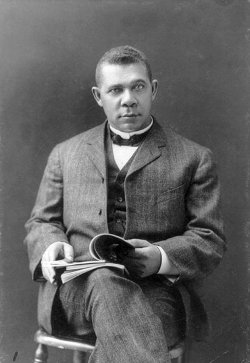 Booker Taliaferro Washington (1856 –1915) was a pioneering black leader in the late nineteenth and early twentieth century United States, particularly in the rural South. Washington was the pre-eminent black accommodationist in the post-slavery era, who founded the famous Tuskegee Institute. His organisations and philosophy flourished under the Jim Crow era of white supremacy but failed to tackle it. As a key figure in African-American leadership his approach was contentious among his contemporaries and his name  still prompts much debate today in terms of race relations strategy.

Born into slavery, with an unknown white father Washington grew up in rural Virginia. This experience can go some way in explaining both his philosophies of self-help and why this generation of African-Americans so widely identified with him. Post emancipation he taught himself to read and worked until he could get an education, eventually attending college and Hampton Normal and Agricultural Institute. The Institute aimed to create teachers; however the curriculum consisted of agricultural skills, not liberal arts. This was part of a strategy of self-help for former slaves. Indeed, Washington became one such teacher when he graduated.

In 1880 he founded the Tuskgee Institute in Alabama. This institute has many affiliates who went on to become important figures in the Black Atlantic. This includes Lamina Sankoh, Amelia Boynton Robinson and Claude McKay.Through Washington’s fund raising he became a well-known speaker and his philosophy became prominent. Washington wrote many  books which included two autobiographies, My Life and Work (1900) and Up From Slavery (1901), a biography of Fredrick Douglas (1907) and various books discussing African-American citizenship.

Washington promoted the accommodationist approach to civil rights. This was based on his theory that African Americans could not contend with social and political oppression and so should focus on developing their economic power. This could be achieved by acquiring manual skills. The Tuskgee Institute was one such place that taught and developed these skills. His belief was that this strategy would lead the white population to see that blacks were not naturally intellectually inferior, as they had been so accused. This, in the long run, could lead to social acceptance and increased equality. Washington did not contend the value of academic education, but following emancipation black people in the United States with academic qualifications were not able to find work. However, he did use his influence privately to help further the ‘black cause’ politically.

Washington achieved national prominence when in 1895 he gave his Atlanta Compromise speech which has since come to be considered one of the most significant speeches of its time and place. Here, he warned against continued oppression, stating that an educated, accepted black population would contribute significantly to society as a whole. Particularly in the South where African Americans constituted a third of the population. However, he also said that “The wisest among my race understand that the agitation of questions of social equality is the extremest folly, and that progress in the enjoyment of all the privileges that will come to us must be the result of severe and constant struggle rather than of artificial forcing.” It was here he famously endorsed segregation by comparing it to different fingers on a hand working towards the same goal.

Along with his views on laissez faire politics and Christian values, Washington’s acceptance of the segregated structure of society was very popular among the majority white community which included many contemporary high-powered politicians. Though both black and white members of society gave economic and political support to Washington throughout his life. He was the guest of President Theodore Roosevelt in 1901, making him the first African-American ever invited to the White House, but ...read more