We are pleased to announce that MArch4 students Callum Skinner, Jia-Hao Yang, and Stanley Smith have won the 2nd prize at the ‘Tactical Urbanism Now!’ international competition organised by Terraviva.  The competition asked participants to reimagine public space and to come up with new urban scenarios promote social exchange, community activities and citizens interaction through the implementation of multifunctional designs.

The project, ‘Musical Ecosystems,’ draws from underground music venues in Budapest, which allow marginalised groups to express themselves, and proposes a system of transportable and adaptable structures that can unfold in the city and give space to impromptu performances.

The Liverpool School of Architecture has funded the registration of all MArch4 students to the competition. The students have developed their propositions for the competition alongside their studio work, which for this year has focused on Budapest, under the theme of ‘Remote Discovery.’ Callum, Jia-Hao, and Stanley have been working in Studio 3: Just Space, run by Dr Francesca Piazzoni and Valentino Capelo. The studio looks at the role of design in addressing spatial and social inequalities in the city.

See all the winning and shortlisted projects here: https://www.terravivacompetitions.com/tun2020_results/

Alternative music venues in Budapest allow marginalised groups to express themselves politically and socially, whilst providing a space for NGO’s to operate effectively away from the stigmatisation experienced throughout the city. The current illiberal regime in Hungary seeks to weaken these crucial institutions, both directly through venue closures or restrictions, and indirectly via negative press and propaganda. A rapid gentrification process throughout forward-thinking areas only exacerbates these issues, pushing venues out of the districts they are most effective in. The COVID-19 pandemic now threatens the existence of these independent, free-thinking outlets. Musical Ecosystems in Budapest has proposed that these essential initiatives need urgent help. Analysis of existing venue infrastructures indicate that event spaces require a greater urban presence to improve outreach and strengthen their image within the city. The proposal would provide mobile space extensions and make use of the abundant derelict buildings found in the Magdolna quarter. 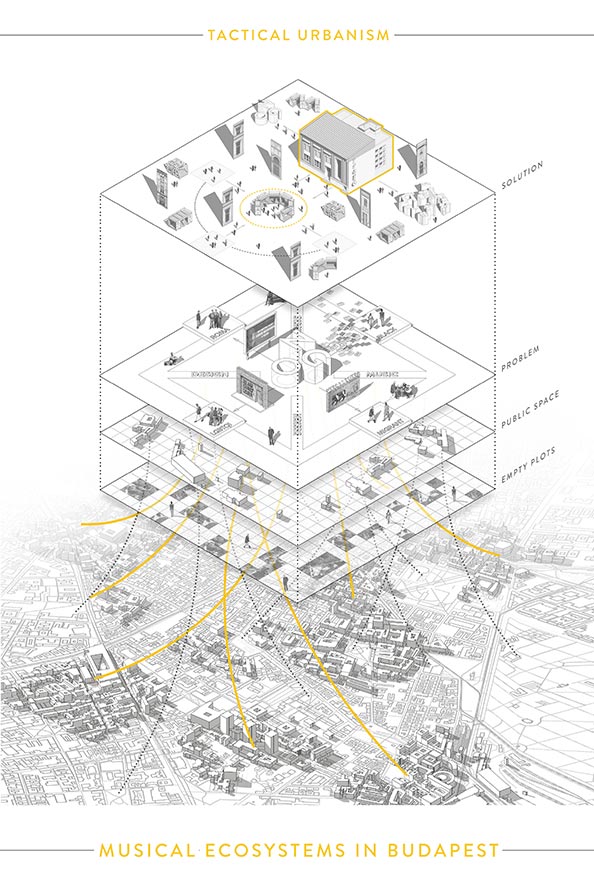 This versatile module would firstly facilitate easy storage and transportation of music equipment around the city, providing opportunity for spontaneous musical concerts, it would provide an adaptable and transformative structure, acting as a bandstand for performances, or to workshop arrangements for interactive events within the community. Thirdly, it would serve as an intuitive urban soundscape to advertise venue spaces. These mobile musical ecosystems would enrich the soundscape of Budapest’s public spaces and enable vulnerable independent music venues develop their urban presence. Advertising their diverse musical scheduling to the city encourages marginalised groups to immerse themselves in music, through spectating, performing or learning.