‍Monika Koeck (Producer and Director, CineTecture) and Richard Koeck (Executive Producer, Director, CAVA) have won with their latest documentary film the prestigious Award of Merit from 2020 The Impact DOCS Awards Competition. The film was jointly funded by the University of Liverpool (Covid19 ODA Response Grant/GCRF) and BP Institute, Cambridge University and forms part of a major initiative to Impact architectural design and public policy in relation to the Covid-19 pandemic.‍ 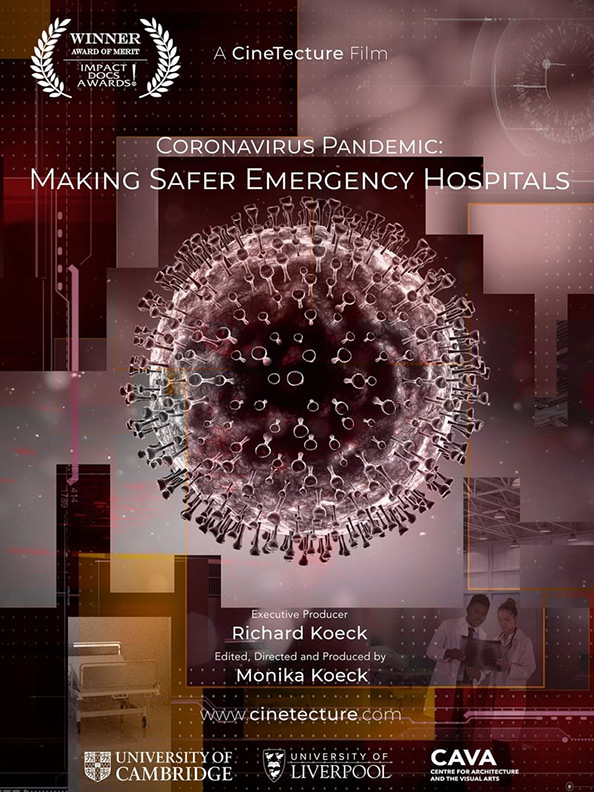 The award was given to the documentary film Coronavirus Pandemic: Making Safer Emergency Hospitals that was produced in collaboration with Prof Andrew Woods (Cambridge University, BPI) and Prof Alan Short (Cambridge University, Architecture), whose research aims to intervene in the current Covid-19 pandemic with the development of a series of practical architectural design solutions. Monika and Richard have produced a creative research output – using sophisticated digital film and animation techniques – that show how the concentration of airborne virus, experienced by patients and healthcare workers in buildings and makeshift hospitals in the wake of the Corona Virus crisis all over the world, can be significantly reduced.

‍Impact DOCS recognises film, television, videography and new media professionals who demonstrate exceptional achievement in craft and creativity, and those who produce standout entertainment or contribute to profound social change. Documentaries were received from 30 countries, including veteran award-winning filmmakers and fresh new talent. Entries were judged by highly qualified and award-winning professionals in the film and television industry.

In winning an Impact DOCS award, Monika Koeck joins the ranks of other high-profile winners of this internationally respected award including the Oscar winning director Louie Psihoyos for his 2016 Best of Show – Racing Extinction, Oscar winner Yael Melamede for (Dis)Honesty – The Truth About Lies, and Emmy Award winner Gerald Rafshoon for Endless Corridors narrated by Oscar winner Jeremy Irons, and many more.

Rick Prickett, who chairs Impact DOCS, had this to say about the latest winners, “The judges and I were simply blown away by the variety and immensely important documentaries we screened. Impact DOCS is not an easy award to win. Entries are received from around the world from powerhouse companies to remarkable new talent. Impact DOCS helps set the standard for craft and creativity as well as power catalysts for global change. The goal of Impact DOCS is to help winners achieve the recognition they deserve for their dedication and work.”

Impact DOCS Awards is in its second year and is the newest member of the Global Film Awards (GFA) family of competitions who have been hosting competitions for 14 years. Often the first stop on the festival circuit, GFA award winners have gone on to win Oscars like the short doc “The Lady in Number Six” and “Mr Hublot” as well as countless Emmys, Tellys and more.

The documentary is used to inform Health Authorities and governments world-wide. This film was presented to The World Health Organization (WHO) in Geneva with whom the Cambridge and CAVA & CineTecture team were in direct conversation. After the release of the film and an open letter, signed by 239 scientists in 32 countries that outlined evidence that reinforced the findings in the film, the WHO recognised the danger from airborne virus particles.

As reported by the BBC the WHO has acknowledged on 9 July there is emerging evidence that the coronavirus can be spread by tiny particles suspended in the air. The WHO provided on that date an update to the scientific brief published on 29 March 2020 that focussed on the “Modes of transmission of virus causing COVID-19: implications for infection prevention and control (IPC) precaution recommendations”, which now includes new scientific evidence available on the airborne transmission of SARS-CoV-2; the virus that causes COVID-19.

Prof Richard Koeck (Executive Producer and Director, CAVA) says: “We are pleased that the WHO has changed its position with regard to the airborne transmission of SARS-CoV-2 and thereby recognise the finding of Cambridge University’s research team we have been collaborating with.”

Monika Koeck (Producer and Director, CineTecture) says: "I am pleased that CAVA’s and CineTecture’s expertise in moving image production, digital visualisations and immersive technologies meant that we were quickly ready to translate fluid mechanics and design research into creative digital research outputs that have helped policymakers to make informed decisions.”