In from the start - women students at University College Liverpool 1882 – c.1900

The Inaugural Meeting of University College, Liverpool, was held in the Music Room in St.George’s Hall on January 14th 1882.

College classes began on the 23rd with forty-five students enrolled; two fifths of these were women. It is often thought that women were not able to undertake university education in the nineteenth century, or if they did, they were not allowed to take a degree. This was not the case in Liverpool, where a more enlightened view prevailed. As the Principal, Gerald Rendall, explained to the Royal Commission on Technical Instruction in 1882: “Our first object was to supply a Higher Education on the standard of London University examinations... in degrees or in the London Matriculation. ….Of course, we do not insist on any examinations at all...(we will) take any who wish to work, allowing them to attend one, two or more classes, as they like.” The only exception to this was that women were not permitted to study medicine. In 1903, when the College became The University of Liverpool, the Statutes were altered to allow women to take degrees in medicine. From 1884, the College was part of Victoria University, a federal group also including Owen’s College, Manchester and Yorkshire College, Leeds. After 1903, they both became independent Universities as well.

Liverpool was not alone in its approach. After 1870, there was growing interest in women’s education; organizations were formed with this specific objective in mind. In Liverpool, Anne Clough founded The Liverpool Ladies Education Association in 1866; in 1874, The Association to promote Higher Education was founded in the city at a meeting addressed by William Rathbone and Emily Davies, one of the pioneers of women’s education in Britain and first Principal of Girton College, Cambridge. The Association ran over forty courses to prepare for the Cambridge Extension Scheme certificate. Where University colleges were established in the late nineteenth century ( Manchester 1851, Newcastle 1871, Bristol 1876, for example), they owed their foundation to the work of the ‘elites’ in the community – lawyers, industrialists, ship-owners, merchants, bankers, brokers, accountants and men of business. Liverpool again was no exception and it is to a very large number of them that the University College owes its existence, together with a significant number of Non-Conformists groups, chiefly the Unitarians.

Eighteen women joined the ranks of the student body in January 1882. Many of them would have been perhaps sixteen years of age; entry at fifteen was permitted for students after tests in a language (Greek, Latin or French), Maths and Science and a recommendation from their recent teachers. Their number had risen to nearly fifty by the late 1880s and stood at 60 in 1892, when the Victoria Building was opened, rising again to 75 in 1896. Students enrolled by term, so the numbers on the roll in any given term could vary considerably. Most of them probably aimed for a qualification at Junior or Intermediate levels of awards in London or Cambridge Local Examinations.
The College did not at first offer degrees and when it did it was as a constituent member of Victoria University. An instance of the award of Victoria University degrees can be seen in the Victoria Gallery and Museum with documentation of the academic career of Elizabeth Becket, who took a degree in Greek. The College Magazine gives other examples in 1889 ; BA degrees for Mary Burn and Ellen McConnell and a BSc degree for Jessie Auld. Degrees in Classics, History and Chemistry were awarded in 1890.

The records in the Sidney Jones Library’s Special Collections include Magazines, College Year Books, Prospectuses and Reports. These do not record how many women studied the subjects offered, but it might be safe to assume
that the majority studied a range from Art, Natural History, Languages (Greek, Latin, Italian, German and French), Economics, History, Classics, English Language and Literature, Philosophy or Mathematics. I wonder how many studied Chemistry, Physics or Engineering? In 1887, over half the enrolled students studied these last four subjects. 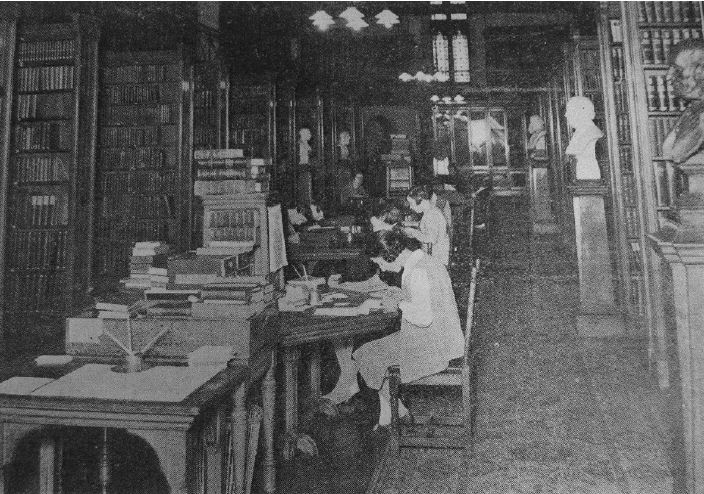 From the evidence it seems that women students played a lively part in College life. The Women’s Student Council was first formed in 1886, under the Chairmanship of Professor Strong. The Council organized the Women’s
Common Room and reading room and their facilities. In 1887, the Women’s Literary Society had fifty members, with Mrs Rendall as President; women were prominent in the Greek Reading Society. As the Victoria Building
neared completion in 1892, the Council petitioned the Principal to decorate and equip their Common Room. Professor Rendall was delighted to accede to this request, going so far as to suggest furniture and fittings after
discussions with his wife and based on his own home furnishings! The Council was able to represent the views of the women students to the College authorities and joined with the men in forming the College Student Council
in October 1892. At this point both the men and women had proper reading rooms and common rooms in the new Victoria Building. For the women a special carved fire-surround was provided with a representation of the tree
of life and the inscription: ‘Quaecumque vera, pudica et amabilia’, (Whatever is true, pure and lovely) intended to inspire teenage students embarking on a new life.

The College Magazine was also founded in 1886 and in 1888 two women were appointed as editors, joining the six men already in post. The extant editions of this publication contain news of College events, such as Societies’
meetings, sports and scholarship winners; lengthy essays by the editors or members of staff; news of College developments, including new buildings and appointments to the staff. There seem to be regular remarks about the
furnishing and equipping of the Women’s Common room, as to its china, rugs, lockers and soft fabrics – clearly a domesticated group of young Victorian ladies! This must be a rare instance where the architect, Alfred Waterhouse,
did not provide for the fitting out and decoration of a room; normally he would have taken great care to do so, but when the Ladies Council petitioned the Principal to decorate their own Common Room, perhaps Waterhouse
wisely retreated. In 1888 the magazine is careful to record that the women raised £180 for the Victoria Building fund, while the men managed but £30. Interestingly the list of women donors includes three Holts, five Rathbones,
eleven Crosfields and several Mellys; all these parents had contributed generously to the College in the 1880s and 1890s.

Accommodation for students seems to have been non-existent for some years. Presumably many of them lived at home and came to the College by parental horse and carriage (for the well-to-do), or on foot or tram for everyone
else. In 1899, a Hall of Residence was provided for the women by Emma Holt at a house in Edge Lane and later at Fairfield. A clubhouse for them was located at 28, Brownlow Street from 1896 (the men had theirs in Bedford
Street), before the Students Union Building designed by Professor Charles Reilly, was erected in 1911. Many social events took place in the Victoria Building, either in the entrance hall or the lecture Theatre, a popular venue for
“Smoking Concerts’, musical evenings and theatricals. Sports facilities at this time were provided in Wavertree, through the generosity of Charles W. Jones (whose son gives his name to the University Library), in Knotty Ash,
Penny Lane and Calderstones, until the Wyncote Estate in Allerton was bought in 1920. 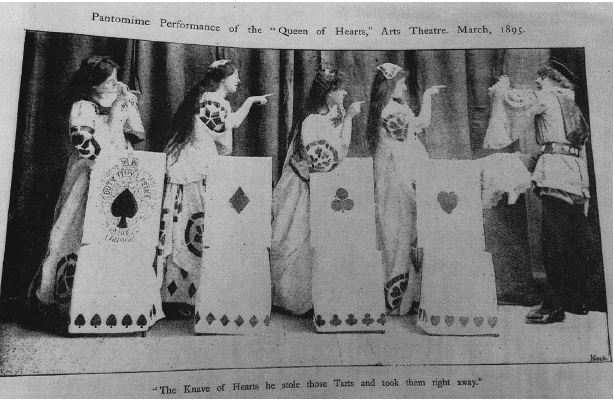 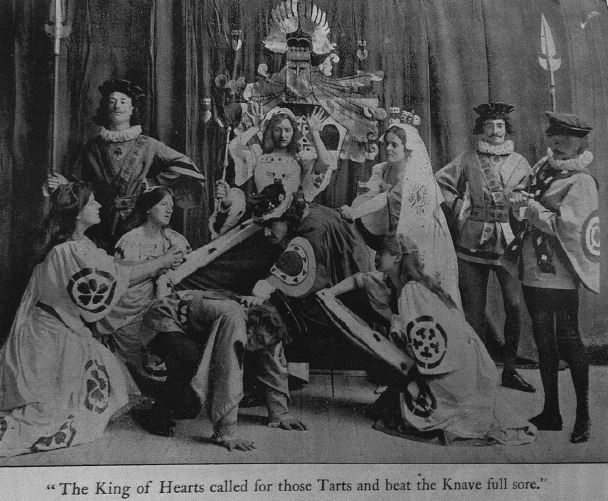 Most subjects seem to have had their own Society, with a programme of lectures and discussions groups, frequently attended by the professors; indeed a professor would have been President and taken an active interest in the Society’s events. Many of them ran evening classes or a programme of lectures in the evenings for the general public as a way of spreading interest in their subject. From the start the College was not intended to be an exclusive institution, although the fees for study meant that the students were largely drawn from the middle class of a thriving city. In 1882, lectures took place on three days per week, at a fee of £2 per term or £4 for a full year. Student numbers suggest that some students attended for perhaps only two of the three terms!.

The women students at University College Liverpool would have found a completely male teaching staff in the nineteenth century. The first female member of staff was Miss Dorothea Pease, who was appointed as Mistress of Method and Tutor in the Primary Department in 1899; the College was committed to Teacher Training from the outset. The Professors, all appointed the second half of 1881, were a distinguished group, including Professor Lodge (Physics) who went on to be Principal of Birmingham University, Professor Herdman (Natural History), Professor McCunn (Philosophy) and Professor Campbell-Brown, of the Medical School, (Chemistry). The first woman Professor was only appointed in 1956 - Nadejda Gorodetsky, Professor of Russian.

The fine plaque on the Brownlow Hill façade of the Victoria Building proclaims that it was erected “For the advancement of learning and the ennoblement of life by the men of Liverpool....”. It is true that the College and its buildings were brought to life through the very generous donations of a great number of important ship-owners and businessmen, among whom George Holt, William Rathbone VI, Henry Tate, Sir Andrew Barclay Walker, and the 15th and 16th Earls of Derby stand out for their contributions in the nineteenth century. Many women played a part in this financial support. The College’s Donor List, published in 1891, is a fascinating document, showing how extensive was the support for the new College. Among the names are those of Mrs Muspratt (wife of a prominent chemical industrialist), Miss Holt and Miss James, all of whom gave over £1000 to the cause (some £60,000 today). Mrs Grant, of Birkenhead, sponsored the Chair of Chemistry with £10,000. Many other women contributed to the various funds set up by the College Council. At a reception given by the Student Council for staff and sponsors in 1887, the College Magazine records William Rathbone announcing his great pleasure at seeing so many women students enrolled, while Professor Carey was full of praise for the College and others which admitted women students.

In conclusion, I was very interested to read an article in the magazine by J H Lightbody in 1887; he was one of the editors at this time. He noted that many men viewed with horror the idea of a more liberal education for women, but that many women were taking up the opportunities offered by Higher Education in Britain. Why do so many men refuse to see the existence of sound sense in women, he asks. He notes that women are refused the vote, even if they are head of the household, that the Married Women’s Property Act is severely discriminatory, that women have few rights over their children, who are their father’s in law. The lack of a father’s financial support can drive the family into the Workhouse and a father can arbitrarily change his children’s religion. Lightbody rounds off with a broadside against those who criticise ‘bluestockings’! Such comments, critical of late Victorian society and prevailing attitudes, would gather increasing support into the twentieth century. In Liverpool, at least higher education for women was being provided by a College and its enlightened Council and staff well before then.
Martin Strauss - Local Historian

Commissioned by the University of Liverpool Women’s Club to mark the Clubs 90th Anniversary on June 7th 2017.

The Women’s Club was set up to meet the needs of the diverse range of women who form the staff and graduate population of the University of Liverpool. It provides a welcoming and stimulating forum and meeting place for women of all ages in both academic and professional services roles. The club provides the opportunity for members to meet new people, make new friends , and get help and advice if they are new to the city.
They can take part in a range of interesting visits to museums, galleries, theatres talks and concerts, as well as the occasional party.