Monica Necchi studied physics at the University of Pavia. She graduated in Nuclear Physics in 2003 and completed her PhD thesis in 2008 at the University of Pavia, with an experimental thesis on possible applications of Resistive Plate Chambers as detectors from high energy physics to biomedical field (as detectors in a Positron Emission Tomography).

From 2004 to 2009 she has been member of the Compact Muon Solenoid  (CMS) Community at CERN and of the Istituto Nazionale di Fisica Nucleare (INFN);  she participated to the commissioning of RPC detectors at CERN and in the INFN Laboratory in Pavia. She is co-author of several publications of the CMS Collaboration.

Since 2004 she is collaborating with the Physics Department of the University of Pavia and she is in charge for Lectures of the Experimental Physics Course.

Her main research interests deal with application of physics into the biomedical field and interactions of radiation with matter.

From 2008 to 2009 she earned a Post Doc Position as Physics researcher in the frame of the FP6-IST 511471, EURITRACK European Riposte against Illicit TR@ffiCKing  at the University of Brescia. In particular, she studied neutron interaction with materials by means of numerical simulation with MCNP code in order to dimension  the shielding for exposed workers and the public, modelling of an optimal green-field layout for a composite shield to be placed around the neutron sources and movable with them.

In 2009 she has been enrolled as Physics researcher in the frame of the FP7-INFRASTUCTURES-2008-ULICE (Union of Light-Ion Centres in Europe) Project (GA 228436)  at CNAO Foundation. The main topics of her activity have been: the study and design of the carbon ion gantry magnetic line; the modelling of an effective shielding layout (MCNP simulations); the dimensioning of the gantry shielding together with the CNAO radio protectionists group and, finally, the coordination of research activities of the ULICE WP6, in particular considering contacts with external teams.

Since 2011 she is the responsible for Research European and National Projects in CNAO. She actively collaborates with Italian, European and other important Institutes and University, teaming up for calls, proposals and events concerning physics, accelerators, oncology and particle therapy. 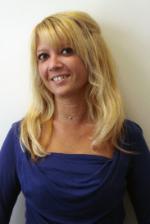