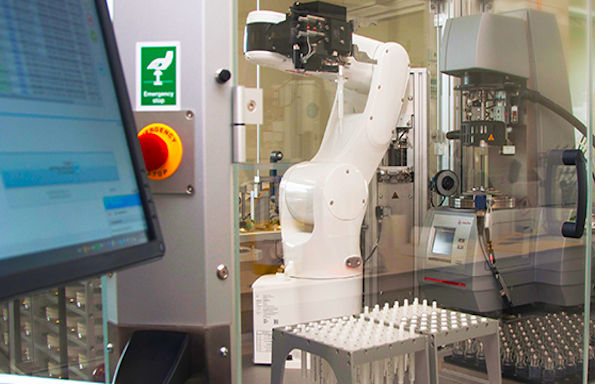 The latest development to come out of Professor Andy Cooper’s research lab features in an article published in the journal Nature, which highlights the increasingly important role that automation is playing in the field of chemistry.

In the article, Professor Cooper, who is Academic Director of the Materials Innovation Factory and Director of the Leverhulme Research Centre for Functional Materials Design, discusses how his research team have developed a mobile robotic chemist to work unassisted in the laboratory.

Benjamin Burger, a PhD student in Professor Cooper’s research group, spent three years building and programming the robot chemist, which is approximately the same size as a person, and which has a robotic arm that sits atop a mobile base.

This robot chemist is already making a big difference to Cooper’s research programme and it has greatly accelerated the task of sifting through thousands of potential materials that could act as catalysts to extract hydrogen from water. The acceleration in sample throughput is enormous: indeed, this robot can investigate approximately 1000 catalyst formulations in one week, which is more than a student could typically study in an entire 4-year PhD.

The robot is already capable of dispensing solids, and Professor Cooper’s team is working on automating analytical techniques to determine the molecular structure of the compounds.

The robot chemist is one of the latest developments to be developed in conjunction with the Leverhulme Research Centre for Functional Materials Design, an interdisciplinary centre which is using the power of modern computer technology to transform the discovery of new materials.

The LRC is a ten-year project with UK and international partners which brings together a cross-disciplinary team of chemists and computer scientists, working with experts in engineering, robotics, physics and management research.