Within LIV.DAT, Alexander Hill is coming towards the end of his PhD and is busy writing his thesis and papers detailing results from his research. Based at LJMU, his project focussed on simulations from the EAGLE project (the Evolution and Assembly of Galaxies and their Environments) to investigate the expected shapes and orientations of the cold gas of galaxies and host dark matter halos ahead of investigations into weak gravitational lensing in upcoming radio surveys. Alexander also worked on the use of augmented reality in scientific outreach and education, culminating with the successful launch of an application for the Royal Society’s Summer Science Exhibition.

Part of his research has now been published in Monthly Notices of the Royal Astronomical Society. The paper by Alexander, LJMU postdoc Juliana Kwan and LIV.DAT supervisors Prof Rob Crain and Prof Ian McCarthy present measurement of the morphology of star-forming gas in galaxies from the EAGLE simulations, and its alignment relative to stars and dark matter (DM). 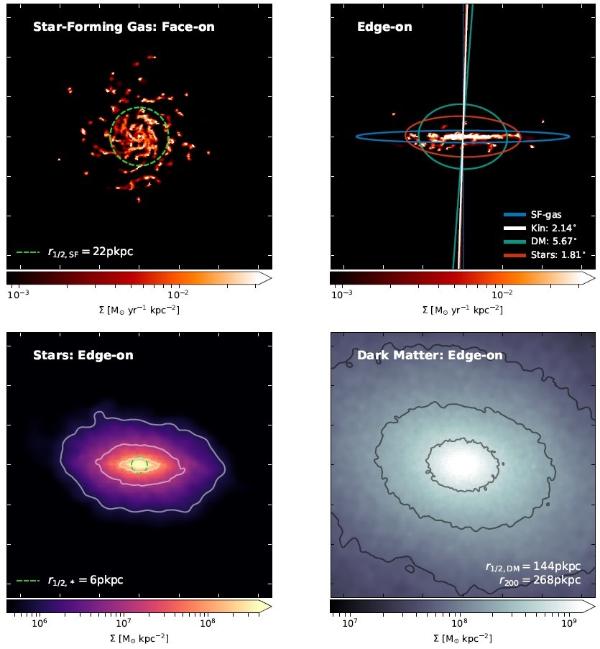 Imaging of galaxies in the radio continuum enables weak lensing experiments that complement traditional optical approaches. Radio emission may be traced in simulations by tracking the star-forming gas, allowing studies of systematic uncertainties in lensing, such as the intrinsic alignment of galaxies. In the first of a pair of papers, the researchers found that star-forming gas is typically more flattened than the stars and DM within halo centres, particularly for present-day structures of total mass ∼1012−12.5M⊙⁠, which preferentially host star-forming galaxies with rotationally supported stellar discs. Such systems have oblate, spheroidal star-forming gas distributions, but in both less- and more-massive subhaloes the distributions tend to be prolate, and its morphology correlates positively and significantly with that of its host galaxy’s stars, both in terms of sphericity and triaxiality.

The minor axis of star-forming gas most commonly aligns with the minor axis of its host subhalo’s central DM distribution, but this alignment is often poor in subhaloes with a prolate DM distribution. Star-forming gas aligns with the DM at the centre of its parent subhalo less strongly than is the case for stars, but its morphological minor axis aligns closely with its kinematic axis, affording a route to observational identification of the unsheared morphological axis. The projected ellipticities of star-forming gas in EAGLE are consistent with shapes inferred from high-fidelity radio continuum images, and they exhibit greater shape noise than is the case for images of the stars, owing to the greater characteristic flattening of star-forming gas with respect to stars.