We are pleased to announce that the Mu3e experiment technical design report has recently been published in Nuclear Instruments and Methods A. The report has 10 authors from the Particle Physics Group at Liverpool including Professor J Vossebeld (head of the Liverpool mu3e team) and LIV.DAT Supervisor Dr Nikolaos Rompotis and LIV.DAT student Sean Hughes.

Within LIV.DAT, Sean continued his research studies with the Mu3e experiment from his MPhys research project involving data analysis of the simulation of the charged lepton violating decay. During his PhD he is now involved in the development of the Mu3e simulation software, and also the analysis of Mu3e first data. This data is being used in validation studies of the simulation with particular regard to the timing responses of various parts of the Mu3e detector.

The Liverpool mu3e group was founded by Professor Vossebeld in 2016 and makes major contributions to the Mu3e silicon tracker construction and also the preparation for physics analysis. 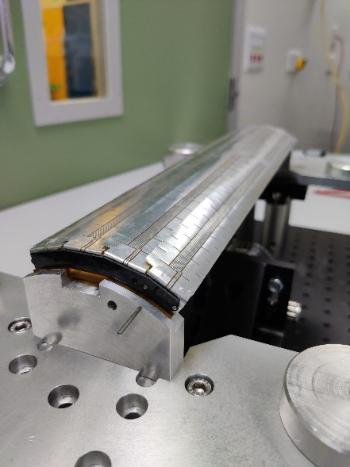 Finished thermal mechanical mockup module from the outer detector constructed in Liverpool. These modules allow for testing of the construction methods as well as the novel helium cooling of the detector.

The group has also pioneered the use of GRID for Mu3e analysis purposes. The Mu3e experiment is currently under construction at PSI and aims to search for the ultra rare decay of the muon to 3 electrons with precision that is several orders of magnitude better than the currently available results.