At the world’s highest energy machine ever built so far, the Large Hadron Collider (LHC) at CERN (Switzerland), bunches of protons collide with other bunches of protons with a frequency as often as 40 million times in each second. This unprecedented collision rate allowed for instance to find a new fundamental particle like a needle in a haystack, the Higgs boson. Beyond the discovery of such rare, needle-like enhancements in the number of the observed particles, it is of utmost importance to understand how often those particles may occur in comparison to the number of proton-proton collisions which have been happening.

Only if we get this basic normalisation correct, then we can better understand details of how nature works in the world of the building blocks of our Universe and only in this way, we may put our current paradigms on a precision test bench and well, may discover new particles which may hide otherwise. It is thus a mandatory task for the LHC operation team as well as the experiments to monitor as accurately as possible the number of collisions per time, which is called specific luminosity. The specific luminosity, when integrated over time, is one of the fundamental quantities to determine the cross sections of particles, either known or new. Hence one of the most pressing tasks is how to control the time-dependence of the specific luminosity which is one of the dominant systematic uncertainties for this quantity.

Here a team of Liverpool ATLAS physicists led by Prof. Uta Klein together with Dr Jan Kretzschmar, both LIV.DAT supervisors for Ricardo Gonzalez Lopez whose project involves the search for W' and Z' bosons, scrutinised a new method using measurements of the so-called Z boson which is about 90 times heavier than the proton and which is produced copiously at the LHC.

The Z-boson itself carries no charge, and the experimenters used the very clean signatures of the Z-boson decay into either an electron and its anti-particle or a muon and its anti-particle. Doing so, it gives measurements in two distinct channels. The Liverpool team analysed carefully all proton-proton collisions recorded by the ATLAS experiment during 2015 and 2018, a period which is usually referred to as the LHC Run 2. Since each of the Z-boson decay channels involve different particle types, either electrons or muons, who are distinct in their behaviour in the ATLAS detector, the team retrieved two, independent of each other, results for the number of Z-boson counts. Hence comparing the specific luminosity estimates of the two channels allowed a powerful cross check which delivered an estimate for the stability over time of approximately 0.6% for the number of proton-proton collisions as recorded with the ATLAS detector, without any apparent trends per data-taking year. 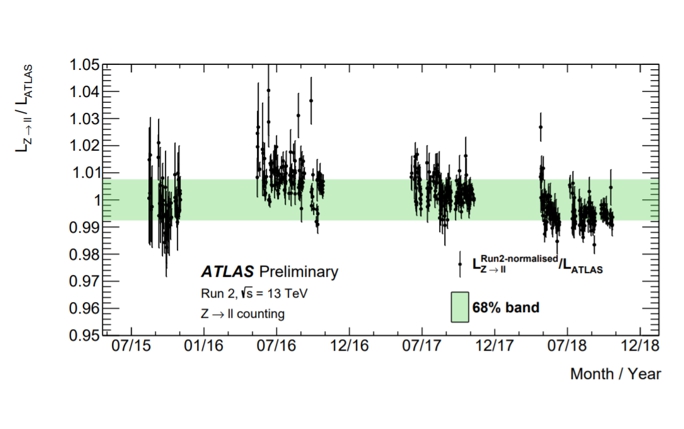 The very good consistency of the two channels also enabled to form a mean from the electron and muon-channel Z-boson counts, thus improving the statistical precision of the method. Over the full Run-2 period, the mean number of Z-boson counts (denoted with Z_ll in the Figure above) can be normalised to the ATLAS baseline luminosity measurement where the latter is utilizing a totally different experimental method.

The resulting ratio of the new method versus the baseline method is shown in the vertical axis of the Figure, while the horizontal axis shows the days where proton-proton collisions happened in each of the years ranging from 2015 to 2018. The green band visualises the spread around unity and indicates the average level of agreement between the new and the baseline monitoring method. This spread is about 0.8% and clear trends are apparent for instance for the data taking year 2016, see Figure. This monitoring of the relative stability of the baseline ATLAS luminosity using the counting of Z bosons started to contribute to an improved characterisation of the systematic uncertainties affecting the baseline ATLAS luminosity measurement and triggered a set of new investigations to understand the possible reasons for the deviations.

The team published their full results earlier this year in a public ATLAS note.