HZDR is a public-funded research institute conducting research in those fields that are of great relevance to society such as health, energy, and matter. The HZDR has been a member of the Helmholtz Association, Germany’s largest research organization, since January 1, 2011. It has four locations: in Dresden, Freiberg, Leipzig, and Grenoble and employs more than 900 people – 430 of whom are scientists including 160 doctoral candidates. PhD students are educed in collaboration with Dresden University of Technology and with other universities and research organizations in the Dresden area. 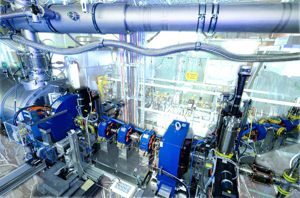 Located with the ELBE accelerator, the DRACO short pulse Ti:Sa laser system (5J in 30 fs, to be upgraded to 500 TW in 2013) is being used to investigate novel laser-based acceleration techniques of charged particles such as protons and electrons in both solid and underdense plasmas targets. This offers the unique opportunity to study laser-electron interaction schemes with a well-established electron source and a high-energy laser system. This serves as a test base for both future experiments on laser-electron interaction with laser-accelerated electrons as for future XFEL and LCLS experiments.