Exciting news hot off the press: "we're ready to start off the GDSL bi-weekly Brown Bag Seminar Series. First session will be next week on Wednesday October 23rd, so save the date! "

But hang on -- what is a 'Brown Bag Seminar Series'? Well, Lynne Murphy, Professor of Linguistics at the University of Sussex, explains in this 2008 blog post, that

"the venerable academic (etc.) institution, the brown-bag lunch (as in I'm going to a brown-bag lunch, rather than in I brought a brown-bag lunch)...is an uncatered event that occurs over the lunch hour [... involving] usually a somewhat informal talk by an expert on a subject."

At time of writing she states that it is American- and not British-English, but it seems now to be catching on in Britain: Cambridge, LSE, UCL, Nottingham, and St Andrews all have evidence of Brown Bag Seminars.

You might also be interested to know that the humble brown lunch-carrying bag which names these seminars is no mere holder of food. Rather it is itself an item of notable technological history, involving industrial espionage and the 19th Century's most famous woman inventor.

At the age of 30, Margaret. E Knight invented a machine that folded and glued paper to form the flat-bottomed brown paper bags familiar to shoppers today. Knight built a wooden model of the device, but needed a working iron model to apply for a patent. Charles Annan, who was in the machine shop where Knight's iron model was being built, stole her design and patented the device. Knight filed a successful patent interference lawsuit and was awarded the patent in 1871. (Wikipedia: 2019)

Anyway, as you might be able to see in the poster below, it will be in Rendall Building (REN-LT8), from 12-1. With Jeremiah Nieves speaking on Modelling Global Human Settlements. Bring your own lunch and come if you can! 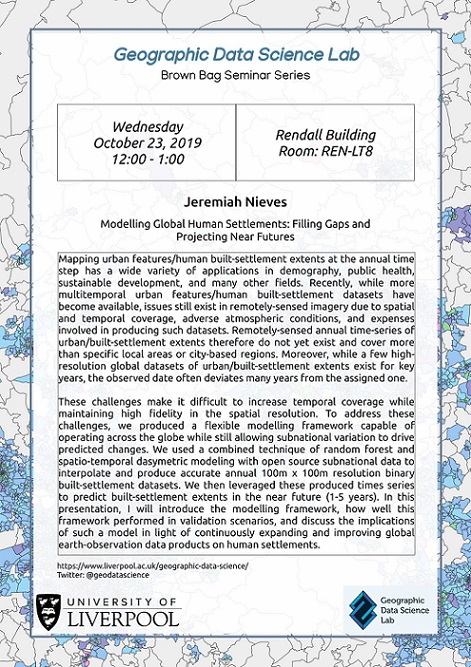