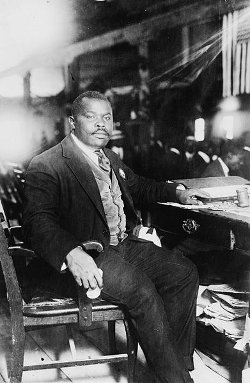 its ability to mobilise ordinary black people. The Black Star Line for instance was funded by $10,000,000 of investment mainly contributed by ordinary working African-Americans, making it an important symbol.

Garveyism had a massive impact in terms of promoting black pride. Garvey gave black people hope by talking about Africa’s glorious past telling them to unite, emancipate and improve. Members of the UNIA were given uniforms which developed pride as a physical statement. Garvey believed in and promoted racial purity and a mobilised black nationalism. He refused any white philanthropy. His ‘Africa for Africans’ movement encouraged black Americans to move to Africa, which he regarded as their racial homeland, whilst implying that white people should not live there.

The Black Star Line was founded with the intention of providing transport for the 'Back to Africa' scheme and at a UNIA conference in 1920, he was even elected provisional president of the entire continent of Africa. This aspect of the organisation was significant as it demonstrated the uniqueness of this group’s plans on a global scale. For many contemporaries these such plans went too far, discrediting black Americans through elaborate and unachievable schemes revealing Garvey to be nothing more than an impassioned demamgogue.

There were many practical problems attached to the movement. Garvey was not a good business man, he was vicously autocratic and put loyalty ahead of expertise. This meant businesses soon floundered because employees were not experienced in relevant fields of knowledge or work. The Black Star Line endeavour, embarked upon with such high-profile fanfare, ended in disaster as Garvey was conned by vastly overpaying for an old ship, whilst he was also unsuccessful in persuading the Liberian government to provide land for African-Americans to move to. He was also criticised for being hypocritical by contemporaries: for example, despite insisting that his followers think ‘race-first’ in all areas of life, he was ‘exposed’ for having a Jewish tailor. Furthermore, an irredeemable turning point for many was when Garvey met with a leader of the Ku Klux Klan in 1922 to discuss enforcing racial separatism.

Garvey’s leadership unravelled as his growing popularity and the success of the movement had made him a target of the federal government, which eventually led to his downfall. J. Edgar Hoover was then working for the Department of Justice and had a vendetta against Garvey sending a black agent to infiltrate the UNIA and build a legal case against him. Eventually he was charged with defrauding one man of $25. For this he was sent to prison for two years. He had served half of his sentence when President Calvin Coolidge commuted the rest of his prison term and had him deported to Jamaica.

Following this Garvey embarked on a number of short-lived and unsuccessful projects. In 1935, he moved to London where he died on 10 June 1940. Despite the mixed successes of UNIA projects, and Garvey’s questionable latter alliances, his positive symbolic power for African-Americans was inextinguishable, and he laid the foundations for later black pride and black power movements. When his body was returned to Jamaica in 1964, he was declared the country’s first national hero.