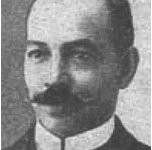 Early Black British mayor and a founding member of the Labour Party.

Keir Hardie and Ramsay MacDonald are well-known as the founding fathers of the Labour Party, but the part played by Liverpool-born John Archer is not always remembered.

John Richard Archer (1863-1932), was Mayor of Battersea in 1913 and one of Britain’s earliest  black mayors. John Archer, was thought to be the first black mayor in Britain until quite recently, but an even earlier candidate for that honour is Dr. Allan Glaisyer Minns, Mayor of Thetford in Norfolk, elected in 1904, nine years before John. Dr. Minns was born at Inagua Bahamas in 1858 and Educated at Guy’s Hospital, London. He was Medical Officer at Thetford Workhouse and Thetford Cottage Hospital.

John Archer was born on 8 June and as a child lived at number 3 Blake Street, Liverpool, behind the present-day Lime Street Station, Liverpool, not far from the infamous Brownlow Hill Workhouse. Richard Archer, John’s father, was a Barbadian ship’s steward whilst his mother, Mary Theresa Burns, was Irish born.

John was a medical student for a time and a prizewinning photographer. A life-long socialist, John travelled at least three times around the world in his youth, living for a while in the West Indies and North America. He met his wife, Bertha, in Canada and returned to Britain, settling in Battersea in the 1890s near Battersea Park at 55 Brymaer Road.

Politically, Battersea was at the time dominated by the Labour, Liberal and radical internationalist movements. John was soon involved in the Battersea Labour League, but had originally begun his political life speaking against spiritualism. Well-known for his practical approach to social welfare, John was elected to the Wandsworth Union Board of Guardians in 1906, eventually being elected councillor.

When John was nominated for Progressive candidate for Mayor in Battersea in November, 1913. the black vote was very small indeed. The newspapers made something of a fuss, as the first Catholic mayor T. P. Brogan, had been John Archer’s mentor prior to his election. The press were not familiar with the old dual-heritage Liverpool-born Black Community and were somewhat mixed-up about his origins. Some members of the press thought that he was Burmese and were surprised at his command of the English language.  When John was elected on 10 November, the Black American activist, W. E. B. Dubois, wrote in his journal, the Crisis, that he “…fears no man, and brooks no insult because of the race to which he is proud to belong.”

John faced a good deal of  racism from the press. In November of 1913, following John’s election as mayor, one newspaper, the South Western Star, stated, “It is not meet that the white man should be governed and controlled by a man of colour. It has always been that the white man ruled and it must always be so. lf not, goodbye to the prestige of Great Britain.’”

Another newspaper, the Daily Express recorded John’s reply to the wild conjecture in the media about his ethnic origins:

“It is a great victory such as never been gained before… I am the proud victor. I am a man of colour. Many of the things that have been said about me, however, are absolutely untrue.

I have a brother, but I should have to have several for us to be born in as many places as we have been said to have been born in… I am the son of a man born in the West Indian Islands. I was born in England, in a little obscure village never heard of until now - the City of Liverpool. I am Lancastrian born and bred (John was being sarcastic, as Liverpool was the second city of England at the time).

My mother - well, she was my mother. My mother was not born in Rangoon. She was not Burmese. She belonged to one of the grandest races on the face of the earth. My mother was an Irishwoman.

So there is not so much of the foreigner about me after all.”

John was a Pan-Africanist, believing in a common bond between black people everywhere. John was a close friend of the musician Samuel Coleridge Taylor, the composer of ‘Hiawatha’. Both were black activists and members of the African Association formed in 1897 by black students from all over the world. Both John and Samuel were elected as representatives to the first Pan-African Conference at Westminster in July 1900, organised by Henry Sylvester Williams, a Trinidadian. They organised a petition to Queen Victoria to consider the plight of ‘the native races’, as they were then called even by the Pan-African Conference! John described the early death of Samuel Coleridge Taylor in September 1912  as “a blow to the race”.

At John Archer’s presidential address to the inaugural meeting of the African Progress Union in 1918, following World War I in which many black troops fought, he had to say-

“I greatly dislike' bringing coals to Newcastle,  and in addressing you to¬night, as one born in England, I fear that is what I am doing, but I take courage, from the fact I will not accept second place with any here for love of my race. I am, and always will be, a race man. That feeling was born in me when quite a little boy in my natal city Liverpool. A famous company of American Negroes were playing that soul-stirring Negro tragedy ‘Uncle Tom’s Cabin’. I saw the play, and from that day the seeds of resentment were planted within me that have resulted in making me the race-man I am. Too long, much too long, has the Negro race suffered…

Hence I say we who were born under British rule and are of the Negro race here still need reparation to be made to us. We are the ones to show resentment, if it should be shown. We, the offspring of those islands are the ones to bear malice, if it should be borne. How have we shown this resentment? How have we borne this malice? Look in France and Flanders, and we get the answer. When England was in dire need, African, American and West Indian Negroes forgot injustice, forgot wrongs; forgot insults, and hastened to the nation's call. How have they been requited?”

Contributed by: RC from the book Liverpool Black Pioneers