In a significant technological advance for antimatter research, the BASE (Baryon Antibaryon Symmetry Experiment) collaboration has used laser-cooled ions to cool a proton more quickly and to lower temperatures than is possible using existing methods. The new technique, which introduces a separate Penning trap, promises to reduce the time needed to cool protons and antiprotons to sub-Kelvin temperatures from hours to seconds, potentially increasing the sample sizes available for precision matter-antimatter comparisons by orders of magnitude.

Within the AVA Network, R&D into beyond state-of-the-art beam handling, storing and analysis techniques paves the way for the design of novel low energy antimatter experiments. For example, AVA Fellow Markus Wiesinger’s project focussed on the Sympathetic Cooling of Antiprotons where he worked on advanced cooling techniques for (anti)protons in Penning traps with the aim of improved measurements of the proton and antiproton magnetic moment. Both Markus and his supervisor Stefan Ulmer are members of the BASE collaboration. 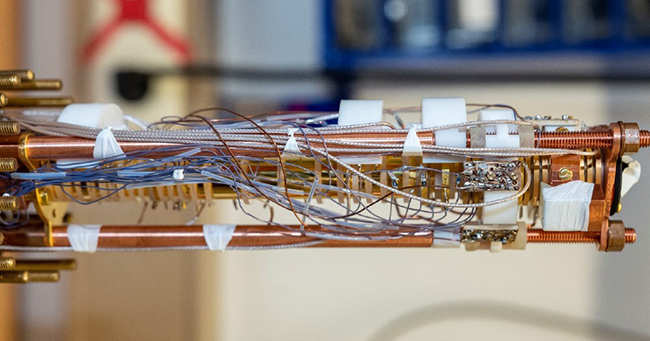 This new technique, as recently reported in Nature, is an important milestone in precision Penning trap spectroscopy and the test setup at the University of Mainz also reached temperatures approximately 10 times lower than the limit of the established resistive-cooling technique. With optimised procedures the collaboration expects that they should be able to reach particle temperatures of the order of 20-50 milli Kelvin (mK), ideally in cooling times of the order of 10 seconds. Previous methods allowed them to reach 100 mK in 10 hours.

The speedy new two-trap cooling procedure promises a huge increase in the statistics that are available to experimenters. It is also a game-changing development for the study of BASE’s main particle of interest: the antiproton. Conventional cooling techniques are difficult to apply to antimatter because it is highly challenging to put matter and antimatter in the same trap. Applying the new technique should allow a significant improvement on BASE’s already world-leading measurements of fundamental properties of antiprotons. Such measurements have the potential to shed light on one of the biggest unanswered questions in fundamental physics: the unexplained surfeit of matter over antimatter in the universe.

The BASE collaboration’s vision is to continually improve the precision of the matter-antimatter comparisons to develop a better understanding of the cosmological matter–antimatter asymmetry. The newly developed technique will become a key method in these experiments, which aim to measure fundamental antimatter constants at the sub-parts-per-trillion level.