The MSCA  European Researchers’ Night is a yearly event organized at institutions all across Europe and supported by Marie Skłodowska-Curie Actions . On the day, most institutions cover a variety of disciplines and are open until late at night and offer a range of engaging outreach activities, such as lab tours, lectures, workshops, science-related competitions and hands-on activities. In 2019 the event took place on 27 September in many countries across Europe. Two AVA Fellows, Dominka Alfs and Amit Nanda participated by supporting their local institutions.

The 2019 edition gathered about 73,000 participants in Poland. Dominika Alfs participated in the Researchers’ Night at the Jagiellonian University in Krakow. She prepared and led one of the workshops for 5 - 10 years old children. The name of the workshop was ‘How to Defeat a Dragon” and it was a combination of demonstrations and hands-on activities from Physics and Chemistry. All hands-on activities were performed with products that are either used every day in household or are easily available. Besides the fact that science is fun, the main messages of the workshop were that even things which look like magic can be explained by science and that one does not need complicated tools to learn about some phenomena. Older kids and parents were often interested in detailed explanations of experiments.

Sci4all (Science for all of us) was Austria‘s contribution to the Europeans Researchers’ Night and in 2019 it was held on at the University of Applied Arts. This was organized by the Practical Robotics Institute Austria in cooperation with the University of Natural Resources and Life Sciences (BOKU), FH Campus Vienna, Science Communications, Kinderbüroder Universität Vienna and Universität für angewandte Kunst Vienna. 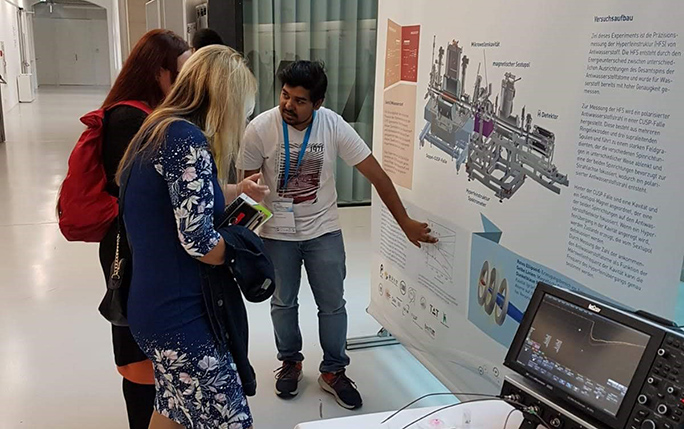 Amit explaining the hyperfine structure of (anti-)hydrogen and the importance of its precise determination.

The Stefan Meyer Institute, which is also the host institute of AVA Fellow Amit Nanda, was represented with two projects in this event: the ALICE and the ASACUSA experiments at CERN. Amit had a very active participation in the demonstration of the ASACUSA experiment. He took part in the building of a linear Paul trap for this outreach activity. During the demonstration, the public, the children and young people were encouraged to understand the science behind such a trap. They enjoyed watching the live motion of charged particles. They could even play with a safe DC power supply source to decide where to move and hold the charged particles. To further explain better how the electric field changes in time and helps to confine the charged particles, Amit played an animation of the electric field simulated for this trap.

Apart from the demonstration of the trap, Amit guided the visitors through an ASACUSA poster which shows the main motivation for fundamental research on antimatter, what properties of antimatter does ASACUSA want to measure, how they create antimatter and the complexity of the apparatus used in such experiments. During the discussion of the poster, Amit became friends with some students doing their masters and bachelors in different universities in Vienna. The impact was obvious because after the event some of them contacted him directly to learn more about antimatter, which he was personally very happy to tell.