Looking back at 2019, it was a busy year for AVA fellows not only in terms of research, but also in communicating science. Outreach is an important part of every project funded by Horizon 2020 and therefore AVA supports its Fellows to promote the network and antimatter physics to variety of audiences. Apart from organising network wide outreach activities such as Outreach Symposia and Public talks, all AVA Fellows also contribute to outreach by their own individual events including for example visiting local Schools.

First school visit of 2019 was by Dominika Alfs who visited her former high school in January 2019 and had about an hour-long conversation with the students from the 2nd grade of high school (out of 3 grades, 18 years old) and other students interested in Physics. The talk was part of a series of meetings with former students. At the beginning, Dominika described her experience - from high school, studies in Physics in Poland and finally her PhD in Germany. She tried to explain her current project by starting from the concepts that students already know (elementary particles, principles of interaction of charged particles with matter etc.)  and connecting them with the detection methods. This was then linked to the high energy physics, CERN and finally - low energies and antimatter research as she is studying it herself within AVA. A second part was focused on the opportunities for students both in Poland and abroad. “There are several scholarships or internship possibilities, but high school students are rarely aware of them or they learn about them too late to plan accordingly”, explained Dominika why she covered such topic in her presentation.   The last part was an informal discussion with students and answering their questions. In October 2019 one of the older students participating in the event started his bachelor's in physics at the same university where Dominika studied and they have maintained the contact ever since. 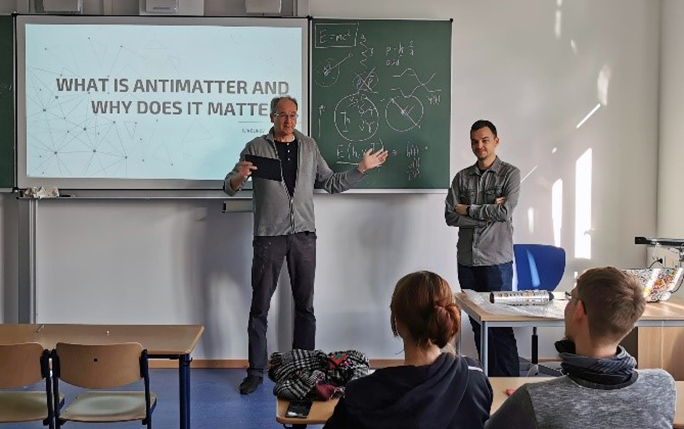 Other Fellows left their school visit for the end of the year when the term curriculum is coming to an end before Christmas break. Ilia Blinov visited  St. Katharin Gymnasium in Oppenheim, Germany.  St. Katharin Gymnasium has a mathematical and scientific focus and gives great importance to the STEM subject’s - mathematics, computer science and natural sciences (biology, chemistry and physics) as well as computer-assisted learning and the use of modern media. Ilia gave a talk to the students and spoke about his work at Stahl-Electronics and the peculiarities of working as an electronics engineer. His presentation also included information about the AVA project and antimatter research in general. He discussed the problems and experiments in the field of antimatter with the students and answered the questions they prepared before his arrival, this included questions about antimatter production and how antimatter is used in industry.

Miha Cerv visited two high schools in his home country Slovenia - Škofijska gimnazija Vipava  (his former high school) and Šolski center Nova Gorica. He presented his research in the AVA project and he also described his studies at the University and the path that led him to his current Fellowship position in AVA. Part of his talk was dedicated to EU-funding and the background of the AVA network, highlighting how students could take part in similar projects in the future themselves. He also talked about his day-to-day work and experience with measurements at CERN in an attempt to demystify the life and work of scientists. For students interested in physics he also covered more technical details about his work and have an insight into the scientific methjods that he learned during his AVA Fellowship. Last, but not least, he talked about living abroad and how this is not something to be afraid of, but a very rewarding experience. 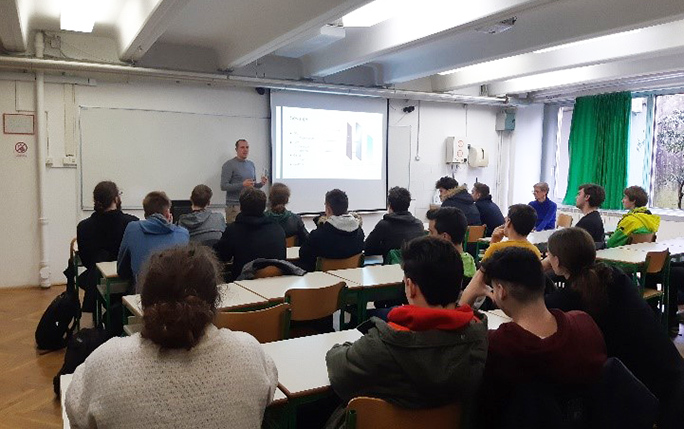 David Haider visited Grimmelshausen High School in Gelnhausen, Germany, where he gave a lecture to two high school classes in their final two years before graduation (16 to 18 years old). His lecture covered his own career in research wrapped with stories from his AVA research project and the physics at GSI. It was attended by students selected to be part of an intensive training course in physics. They got the unique opportunity to get an insight into what opportunities a research career can offer. “For the majority of students at high school an academic career, unfortunately, is only a very vague and distant concept. I tried to bring the topic closer to the audience by exploring topics such as:  Why do  people choose to become researcher, what makes their everyday work interesting, how can one participate in this quest for knowledge?“, described David. 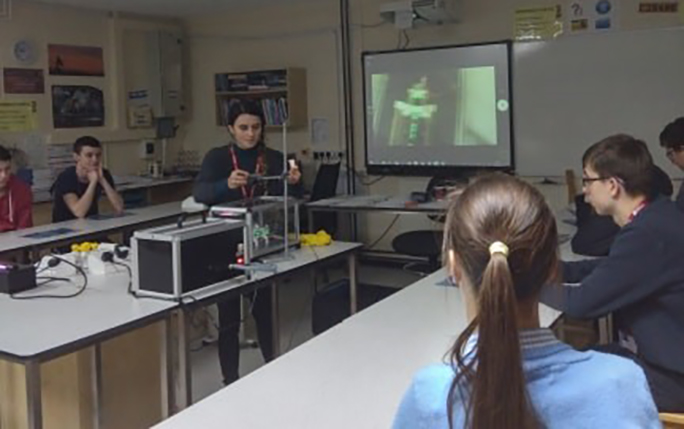 Siara demonstrating to the class.

Siara Fabbri gave one hour talk and demonstration on antimatter physics to 15 A level physics students at Furness College and Barrow Sixth Form located in Barrow-in-Furness, Cumbria. “I  particularly wanted to visit students at this college given that Barrow-in-Furness is considered to be a highly deprived area in England according to National Statistics, English indices of deprivation 2019”, Siara explained her location choice. Her 30 minute talk covered what antimatter is, how it has been portrayed in media, its history and discovery, the fundamental problems facing scientists today regarding antimatter, the research going on at CERN on antimatter, and what she personally gets to do as a PhD student studying antimatter as part of AVA network. After the talk, she had the students come up in groups to interact with two demonstrations – a particle trap and a hydrogen discharge tube with diffraction gratings for the students to look through.