As part of Ledbury Emerging Poetry Critics, a national mentorship scheme that Sarah Howe and Professor Sandeep Parmar founded to address the lack of diversity in UK poetry publishing, reviewing and criticism, a study into the state of poetry and poetry criticism in the UK and Ireland from January 2012 to March 2018 has been undertaken, made possible by the Centre for New and International Writing and the archives at the Scottish Poetry Library and the National Library of Scotland (funded by the HEIF).

The data is split into two sections: poetry, and who writes it; poetry criticism, who writes it, and about whom it is written. The data set covers issues of thirty magazines, published both in print and online, between January 2012 and March 2018. In pure numbers, this covers 19,993 poems and 2,894 critical articles reviewing 4,845 books.

The data was the subject of a discussion on race and reviewing in London in May 2018, featuring Momtaza Mehri and Jericho Brown, audio of which can be found .

The research shows that poets of colour do not have access to a wide range of platforms for publication. 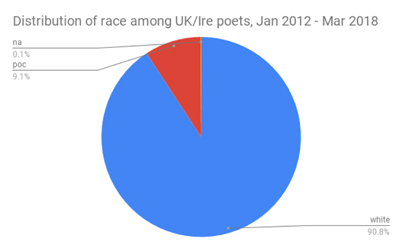 This same exclusion is almost doubly true for critics of colour. 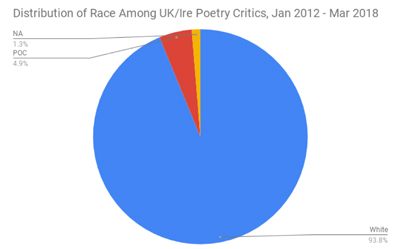 White male critics are the default at many publications, particularly those with male editors. Female and non-binary critics are asked to critique work by poets from a range of backgrounds in a way that men overwhelmingly are not.

The Centre for New and International Writing and the Ledbury Emerging Poetry Critics scheme believe that it is vital that magazine editors educate themselves regarding the barriers currently facing poets and critics and make a determined and durable effort to publish the work of marginalised writers. The data shows in stark terms what happens when little to no active effort is made to seek out and support them.

What initiatives like the Ledbury Emerging Poetry Critics scheme have made clear is that a substantial number of talented writers of colour already exist, and the data in this study makes clear that the systemic exclusion of those writers is very real.

We urge poetry editors in the UK and Ireland to take notice and take action.

More detailed results, including a breakdown of terminology, can be found in the State of Poetry and Poetry Criticism report -PDF.