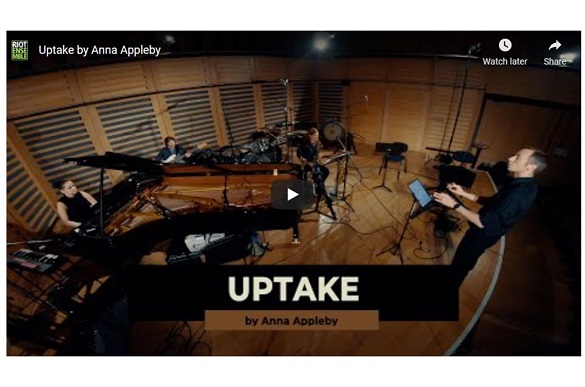 Eight new works of music developed through a collaboration between scientists and composers from the University of Liverpool and the Royal Northern College of Music (RNCM) have received their world premiere.

The new works, created through the PRiSM 8³ 2020 collaboration, were recorded and performed by the Riot Ensemble at Kings Place, London, with support from the Cultural Recovery Fund.

The PRiSM 8³ 2020 collaboration paired 8 University scientists with 8 composers and from the University and RNCM to create new works of music.

During 2019/2020, the scientists from spent time with the composers reflecting on each other’s practice. The composers immersed themselves in understanding the scientists’ work, visiting their laboratories and even taking part in experiments.

The scientists gained insight into the artistic process of composition, and reflected on their own practice in discussion with the musicians and the other scientists – both within their pairings and with the wider cohort.

Professor Rachel Bearon, Professor of Mathematical Biology and Head of the Department of Mathematical Sciences at the University, was one of the eight scientists who participated in the project.

She said: “What a privilege to take part in 8 cubed! Over several months, Dr Joe Leedale and I met with composer Anna Appleby to discuss our research project which explored, via mathematical models, the activity and transport of drugs in liver spheroids. Anna delved deeply into the modelling process and results, and also generously shared with us her evolving musical ideas. It was thrilling to see how scientific concepts were translated into a musical score, and also to gain insight of the creative process.

"The conversations also provided us the opportunity to explore our modelling philosophy from a new perspective, and has provided the strengthening of ties across a diverse range of departments at the University of Liverpool, from Music to Eye and Vision Science.

"Whilst Covid-19 led to cancellation of planned live performances of the works in summer 2020, the opportunity to have the pieces recorded by the Riot Ensemble and made available for all to view on youtube was a wonderful finale to the project."

Professor Catherine Tackley, Head of the Department of Music at the University, said: “It was a pleasure for the Department of Music to work with scientists from across the University and musicians from the RNCM. This project was the continuation of our collaboration with Emily Howard and PRiSM which started with our celebration of Ada Lovelace in Liverpool in 2019.”

The PRiSM 8³ 2020 collaboration grew out of Professor Emily Howard’s appointment as Leverhulme Artist in Residence in the Department of Mathematical Sciences in 2015 during which she created musical compositions based upon the mathematical research of Professor Lasse Rempe. Dr Howard has continued to bring Liverpool scientists, composers and musicians  together including a celebration of Ada Lovelace in Liverpool in October 2019.

PRiSM is the RNCM Centre for Practice & Research in Science & Music.

You can watch each of the performances and read more about each pairing below.