Placements offer the opportunity to experience the workplace environment and how workplace practices differ from academic ones. They also provide the chance to apply your skills in a new setting, solving new problems alongside a new group of people. The LIV.DAT CDT incorporates a 6-month placement for its students, allowing them some industrial experience to implement their big data training and broaden their PhD experience.

LIV.DAT student Monika Yadav carries out research into Particle in Cell (PIC) simulations to model the betatron radiation of electron bunches as they pass and wiggle through plasma. An experimental implementation of her work is foreseen at FACET II, a test facility at SLAC, Stanford University.

At the end of 2021, Monika Yadav was given the opportunity to complete a placement with D-Beam a technology company which develops innovative beam diagnostics for charged particle beams. Monika worked on the optimization of a beam loss monitor prototype. 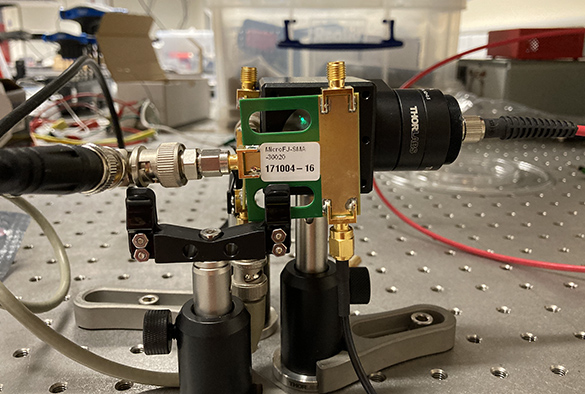 In a particle accelerator, losses occur when the beam collides onto the vacuum pipe through which it circulates due to mistakes in operation or uncontrolled physical phenomena such as wakefields, halo, and beam breakup.  Beam losses result in the production of a shower of charged particles, degrading the initial beam quality and if allowed to occur frequently, cause damage to beamline components. Monitoring the beam loss is vital and the approach taken by D-Beam is to use the Cherenkov radiation mechanism as particles pass through optical fibres. The emitted photons are then propagated to a detector, and the location of the loss event can be reconstructed through time-of-flight measurements. Optical Beam Loss Monitors (oBLMs) can be implemented over the entire beamline providing 10 cm resolution while being highly resistant to radiation-induced damage.

Monika said about her placement: “I’ve learnt a lot during these 3 months, by not only getting experimental skills, but also gaining other transferable skills, and realising how working in industry differs from working in academia. The internship was carried out as in-person daily work at the D-beam laboratory, housed by the Cockcroft Institute (Daresbury). I had full support and guidance from Dr Joseph Wolfenden, my supervisor at D-Beam. I’ve also worked on a scientific news article about a new diagnostics technology using pressurised gases (qHAM) and performed a gas jet experiment with Dr Narender Kumar.

This gave me a solid example of differences between a scientific journal article and a news article. This engagement gave me the opportunity to reflect on my communication and presentation skills while functioning within a team in a company and its differences compared to the way a supervised PhD student would operate within a research group in academia”.