Much to learn, you still have

These are the famous words of Jedi master Yoda to Count Dooku when he faces his old Padawan in Attack of the Clones. Based on these words, Liverpool University held a special event about the Physics of Star Wars to explore what is science and what is fiction in the famous movies. Hundreds of local high school students, university students and staff came on campus on 20 November 2019 and learned how world of Star Wars is connected with proton beam therapy and accelerator-based science in general.

Physics of Star Wars took place in the award-winning Central Teaching Laboratory, which was turned into a teaching space from a galaxy far, far away. The event started with an engaging lecture by LIV.DAT director Professor Carsten Welsch who immersed the participants into the Star Wars universe. He said: “I selected iconic scenes from the movies that everybody will immediately recognise, and used real-world physics to explain what is possible and what is fiction. However, this short scene from ‘Star Wars’ was just the introduction, the appetizer, to make the participants curious and discuss science. I then linked what I had just shown in the film to our current research.”

After the lecture, everyone was able to explore the science of Star Wars themselves through a range of hands-on experiments that were prepared by staff and students of Liverpool University, including several LIV.DAT students. 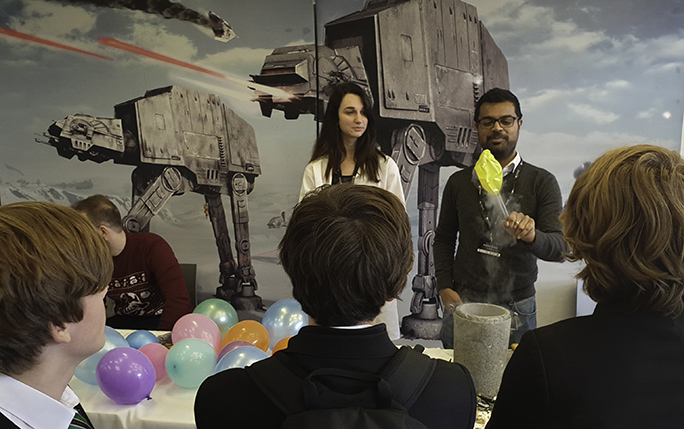 In Star Wars, space ships travel long distances by jumping into Hyperspace. This requires them to undergo extreme acceleration. The Millenium Falcon, the “fastest hunk of junk in the galaxy”, has managed to do the famous Kessel run in under 12 parsecs – but how fast can we really accelerate?

In particle accelerators, the achievable accelerating gradient determines the maximum energy of the beam that can be reached. The most advanced ways of acceleration use plasmas and are studied for example in the EuPRAXIA and AWAKE projects. They aim to increase this gradient by up to a factor of 1,000. This would help reduce the size and costs of future accelerators considerably and this would give access to entirely new medical, security and environmental applications. Researchers within LIV.DAT simulate how the performance of such compact accelerators can be optimized. 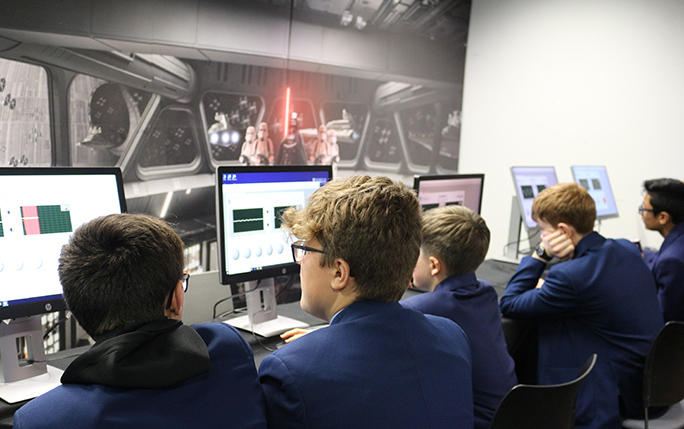 The computer game Surfatron developed by Dr Ricardo Torres from the QUASAR Group’s Project TEAM helps understand how charged particles can “ride” the electric field wave and gain energy. Participants had to find the optimum acceleration parameters and were competing for the maximum energy gain.

The operation of such beam monitors creates huge amounts of data and the analysis of this data poses significant challenges. Machine learning techniques are used to understand the underpinning physics better and an introduction to coding with the help of LEGO and Sphero Star Wars droids is also part of the Physics of Star Wars event.

Current technology does not allow us to build droids such as R2D2 or C3PO yet, but new initiatives such as our Centre for Doctoral Training will bring these technologies ever closer.

Many other exciting developments, including novel plasma accelerating techniques, antimatter research, and upgrades to the world’s largest particle accelerator were discussed at this unique event which was deemed a roaring success. The day was an excellent example of how Star Wars fiction can inspire and train the next generation of researchers.

Yoda also said to Count Dooku “This is just the beginning!” and this is no doubt true in the case of science as well: Many more researchers will be needed in the future and Physics of Star Wars helped fascinate many more.