Given the challenging conditions that detector operation will require at the High Luminosity Large Hadron Collider (HL-LHC) in terms of radiation damage and detection of simultaneous collisions, the ATLAS experiment needs to upgrade its current central tracking system, the Inner Detector. The plan is to use a new all-silicon system, the ATLAS Inner Tracker (ITk), composed by pixel and strip detectors, both of which the University of Liverpool is helping to develop.

At the current stage, pixel sensor designs are being validated with the use of testbeams, such as found at DESY (Hamburg), Fermilab (Chicago) and CERN itself. The setup consists of high-resolution sensors used as reference, with which particle tracks are reconstructed measuring the efficiency in detecting the same track within the device being tested, among other properties. 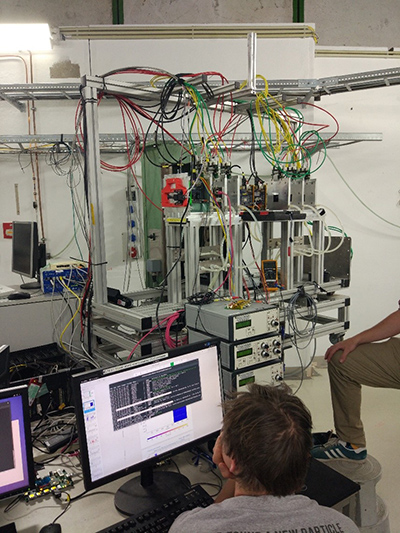 LIV.Dat student Ricardo Gonzalez had the opportunity to attend one of the data-taking periods at DESY in July 2019, as a part of his ATLAS Qualification Task required by the experiment to become an author. The event also hosted a workshop on EUTelescope, a widely used data analysis framework for pixel sensors, originally developed for detector studies for the International Linear Collider (ILC).

The workshop, attended by researchers from institutes spanning all of Europe, served not only as an introduction to the framework for new-comers, but also to establish the basis of the criteria followed in the upcoming ITk Pixel Market Survey, where sensors received by anonymous vendors will be tested to check they meet the required quality standards.

Ricardo said: “It was a great learning experience. Many of the attendants had years of experience in the field and did a great job helping to guide people newer to the subject like myself. Also, meeting the faces that so far had only been names signing emails gave me the first taste of what being in a big collaboration like ATLAS is like.”