The results of Pengnan’s project developed within LA³NET and presented at the final LA3NET conference have recently been published in Nuclear Instruments and Methods in Physics Research A.

The paper presents simulation of ELBE SRF gun II for high-bunch-charge applications. The SRF gun at ELBE will benefit most of the local user beamlines for future high-bunch-charge operations. Parallel to its development, simulation-based investigations have been performed to improve the beam quality for THz experiments and Compton backscattering experiments. These two applications have the most challenging requirements: THz experiments benefit significantly from short bunch lengths at the sub-ps level, while Compton backscattering experiments demand small transverse beam sizes of about 30 µm. The beam dynamics of the SRF gun are simulated with ASTRA and the beam transport is optimized using Elegant. Important physical effects included in simulations are introduced first, where the interesting phenomenon of “slice mismatch” is generally quantified and numerically studied. Afterwards, beam transport strategies and optimization methods are proposed which are based on the specific settings of ELBE but also applicable to similar accelerator setups. Finally, optimizations of the SRF gun and the beam transport in ELBE are presented.

Results show that the SRF gun is capable of providing 500 pC bunches for both applications with better beam qualities than the currently 100 pC bunches supplied by the existing thermionic DC source. 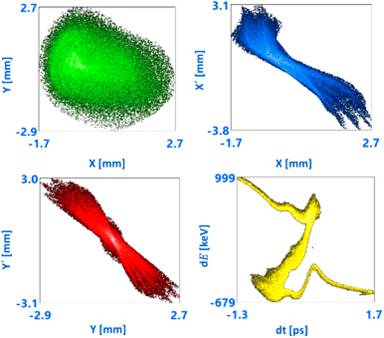 Phase space projections of a 500 pC bunch for the THz experiments.