LA³NET are proud to announce the 2015 winner of the LA³NET Prize is Andreas Döpp, voted as making the most outstanding contribution to the application of lasers at accelerators from the applications received. 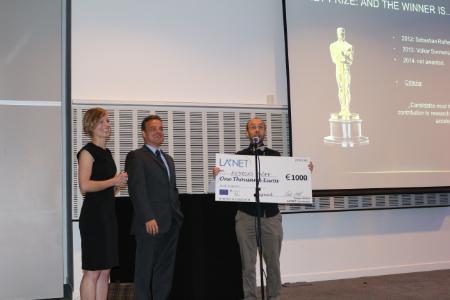 The winner of the prize was announced at the Symposium on Lasers and Accelerators for Science & Society in Liverpool.

Andreas is an LA³NET fellow based at the Spanish Pulsed Lasers Centre (CLPU) in Salamanca, Spain. The research he developed during his Marie Curie fellowship was considered as remarkable advancing the state-of-the-art in the development of new applications of laser plasma accelerators and new perspectives for the laser plasma light sources. During his fellowship Andreas developed close collaboration with LOA (Laboratoire d’Optique Appliqué) in Palaiseau, France, which has had important impact on his research.

Watch a video about his research here!