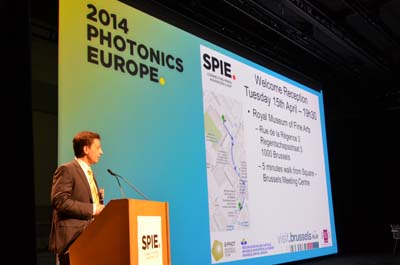 LA³NET fellow Alexandra Alexandrova contributed a paper on “Self-mixing Diode Laser Interferometry for Velocity Measurements of Different Targets” to this year’s SPIE Photonics conference on Photonics, Optics, Lasers, Micro- and Nanotechnologies. The conference took place in Brussels between 14th-17th April 2014 and joined experts from different communities for discussion of the current state-of-the-art in a number of closely related fields.

After the conference Alex Alexandrova visited KU Leuven, Belgium's largest university and one of the oldest and most renowned universities in Europe. There, she met Dr Yuri Koudriavtsev from the Nuclear and Radiation Physics Section and they discussed a set-up they are currently preparing which includes a gas cell for spectrometry.