LA³NET steering committee members Nathalie Lecesne and Rob Ashworth were pleased to present the LAP 2012 Young Scientist Award to worthy winners at the Laser Probing conference held from 4-8 June 2012 in Paris. The award was sponsored by LA³NET. Against high quality competition Patrick Ehlers was chosen for the oral presentation award receiving a certificate and €500. Two posters were selected for recognition from the impressive poster session with winners Junyang Wang and Andrew Klose both receiving a certificate and €250. 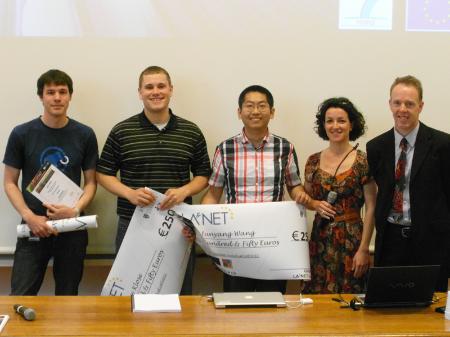 The winning presentations were:

Following the awards ceremony Rob Ashworth gave a presentation on LA³NET describing how the training network functions and key activities. The posts available within the network were advertised as well as the chance for external participation at the Laser Application School in GANIL in October and by applying for the Early Stage Researcher prize. The opportunity for additional organisations to join the network as adjunct partners was also promoted.