The LA³NET ESR Prize is an annual award open to all researchers in the early stages of their careers both from within or outside of the network. For 2012 the Steering Committee are pleased to award the €1,000 prize and certificate to worthy winner Sebastian Rothe for his contribution to the RILIS laser system and ionisation research.

Sebastian Rothe has been acting as principal investigator for the installation of the novel all-solid state tunable laser system at the world leading production plant for exotic radionuclides, ISOLDE at CERN, Geneva. He has also made a major contribution to a ground breaking experiment in fundamental research: the first-ever laser spectroscopic investigation on the heaviest, all radioactive halogen element astatine. This investigation was made possible by the combination of the novel laser system operated by Sebastian with the well established ISOLDE dye laser system. This research also initiated a collaboration between 16 institutions and triggered complementary studies at TRIUMF, Vancouver, Canada, for which Sebastian was invited as most actively contributing co-worker.

The complementary laser system for upgrading RILIS was based on Ti:Sa lasers originally developed at the University of Mainz. The design was further improved and tested at the ISOLDE OFF-LINE mass separator prior to the installation alongside the RILIS dye laser system. The new modes of RILIS operation investigated on-line showed that the system strength lies in the compatibility of the two laser types. This means that most synergies are released using the laser systems in a geared way where wavelengths are created by the most convenient laser available. The Ti:Sa system was involved in 9 out of 16 elements produced in over 2500 h operation in 2011. For Ni, Zn and At the new laser system was an essential ingredient to provide most stable and most efficient beams to the ISOLDE users. 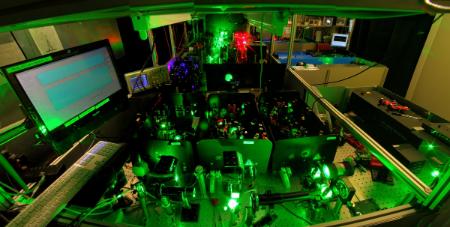 In further fundamental research, in-source laser spectroscopy was used to develop an efficient and selective ionization scheme for the production of radioactive ion beams of astatine isotopes. The RILIS lasers were used to scan the lasers across two known transitions applying a two-colour single resonance ionization scheme. These transitions were confirmed to be transitions from the ground state. A scan of the second step laser revealed an onset of ionization, from which the ionization potential (IP) could be determined for the first time experimentally. At the radioactive ion beam facility ISAC/TRIUMF (Vancouver, Canada) the widely tuneable Ti:Sa lasers available at the TRILIS laser ion source were used to scan for possible second excited states applying a three-color ionization scheme. Back at CERN astatine beams were taken to study beta-delayed fission of light astatine isotopes comparing and testing six possible ionization schemes using the new Ti:Sa laser system under on-line conditions for the first time.

Sebastian is currently finalizing his PhD work at CERN in collaboration with the University of Mainz (Germany) under the supervision of Dr Valentin Fedosseev (CERN) and Prof Dr Klaus Wendt (U. Mainz). On behalf of the network we wish Sebastian good fortune for his future research efforts and career.