The new ELBE at HZDR: Quanta, Antiparticles, Neutrons, and more

On 28th February 2013 the new ELBE (Electron Linac for beams with high Brilliance and low Emittance) was inaugurated by the Prime Minister of the State Saxony Stanislaw Tillich at Helmholtz-Zentrum Dresden-Rossendorf (HZDR). ELBE is a center of high-power radiation sources with a superconducting electron linear accelerator as the heart of the modern research facility. With the help of electrons accelerated to nearly the speed of light a number of different types of radiation can be generated, from positrons - the antiparticles of the electron - to neutrons, gamma rays and infrared light. High-power lasers intended for particle wake field acceleration complement the unique facility.

€55 million is to be invested in expanding the ELBE center with €34 million provided by the State of Saxony. Initially, the old ELBE building was extended nearly doubling the size of the original building. Now devices and equipment are being installed in the newly established labs. The new ELBE is the largest research facility in the State Saxony and is also highly versatile enabling scientists from around the world to carry out experiments with different types of beams. Using electrons, neutrons, positrons, or ultra-short light pulses in the invisible infrared as probes they will explore matter or innovative materials. A further research project is focused on the development of compact accelerators based on high-power lasers for futurea pplication in cancer therapy. 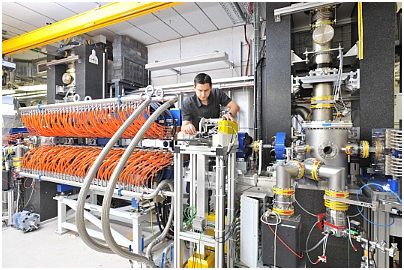