Volker Sonnenschein is to be awarded the LA³NET Researcher Prize 2013, voted as making the most outstanding contribution to the application of lasers at accelerators out of a strong set of applicants. 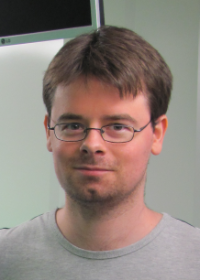 Volker is currently a final year PhD student at the University of Jyväskylä, Finland, working within the IGISOL-LASER group. Responsibilities cover the operation and maintenance of the Ti:sapphire laser system used for the selective and efficient production of radioactive ion beams (RIB) and future high-resolution spectroscopy of exotic nuclei, investigation of new laser ionization schemes,  programming of data acquisition and laser control systems, development of new laser technologies, laser spectroscopy and data analysis as well as communication with other groups and participation in collaborative efforts.

Volker’s work is based on intra-cavity second harmonic generation (IC-SHG) and the development and application of  narrowband Ti:sapphire and injection-locked Ti:sapphire lasers.

In the course of his PhD studies he has made a number of outstanding contributions in the continual development of solid state laser technology which is currently in use at a number of Radioactive Beam Facilities (RIB) worldwide including JYFL, ISOLDE (CERN), GANIL (France), TRIUMF (Canada), Oak Ridge (USA) and in the future at RIKEN (Japan). He has also supported technology transfer activities travelling to share his experience with other groups , among them GANIL, Mainz, RIKEN and Leuven.

One of the most important goals in the field of RIB production is the need for high efficiency and high selectivity and Volker has worked on recent developments to perform laser spectroscopy in the ion source as well as in supersonic atomic jets. His development of a pulsed injection locked Ti:sapphire laser will advance the ability to extract fundamental nuclear structure properties of the most exotic elements available via the sensitive measurement of parts-per-million perturbations on the atomic level structure, which will be the challenge for many facilities in the future. Additionally he has dramatically improved the performance of second, third and fourth harmonic generation through techniques of intracavity frequency doubling. This will allow the range of elements available via resonant laser ionization to be expanded.