The sub-themes for this area include the positioning and repositioning of Liverpool before and after becoming ECoC, the changing meanings associated with the city by its diverse local communities, visitors from around the North West, rest of the UK and overseas, and other UK residents that have not visited the city. It also assesses the strength of local identity and self-confidence.

This project assesses the impact of the ECoC nomination on media representations of Liverpool at large and the Liverpool 08 programme specifically. Using media databases and other sources, we are capturing and analysing local, national and (where available) international print, broadcast and online references to Liverpool as a city and to the Liverpool ECoC at various points in time.

This project explored how Liverpool residents portray and project their city through personal accounts of their own experience and their interaction with visitors to the city. All data collection involved qualitative techniques, spending time with the participants and taking an open approach, using a conversational style to allow a rapport to develop. This included a series of interviews carried out with a range of people, divided into three categories according to the nature of their contact with visitors to the city, and their involvement in 08 training: city centre frontline hotel staff who had received 08 Welcome training; 08 volunteers who had also undergone 08 volunteering training; black cab drivers who had not been involved in any formal 08 related training.

The purpose of this project is to identify the key promotional messages within Liverpool 08 and relevant ECoC partners’ marketing campaigns in order to establish levels of impact on media representation and people’s perception of Liverpool and the ECoC. This involves a review and analysis of key promotional literature about Liverpool and the ECoC 2008 from the bid stage (2003) to the end of 2008. This project offers background information that informs reporting on Liverpool 08 image and identity issues and complements media content analysis research. 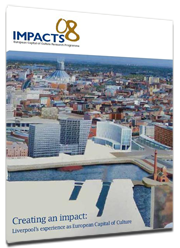