Want to know how Black community history is done well? Then look at the Lancaster Slave Family Trees project. I attended the launch day held at Lancaster University on 13th, November 2021 because I wanted to see good practise in action for my role as Co-Programme Manager for the Centre for the Study of International Slavery (CSIS).

The Lancaster Slave Family Trees project is led by the Lancaster Black History group which was founded by Geraldine Onek in 2020 in the wake of Black Lives Matter and the George Floyd murder. She eloquently introduced this great model of co-produced community history as a movement, not a moment; bringing together community activists, new community researchers, school and college students and teachers, as well as academics of all levels, including the leading historian in this field, Professor Alan Rice, who first coined the phrase ‘guerilla memorialisation’.

The day started with a keynote by Professor Catherine Hall focussed on the Jamaican planter Edward Long, and later in the day there was another keynote by Dr Richard Benjamin on his family links with British Guyana. These discussions paired brilliantly with the highlight, and the main focus of the day: presentations from the community historians on the seven family trees that were at the centre of the research including the Lindlow family (see below).

William Lindow (d.1786) was a prosperous merchant at Lancaster. His wife Abigail (1740 - 1790) was the daughter of his business partner Abram Rawlinson. The Lindows and Rawlinsons were two of the family trees researched.

Different groups researched various family trees. Additonal families put under the microscope were the Bond/Bookers, Satterthwaites, Rawlinsons, Gillows, Gregsons, and the Hindes. These various groups made links to British Caribbean slavery on islands such as St. Vincent and Jamaica (Rawlinson-Lindow and Hinde), and St Kitts (Satterthwaite), to the modern-day Booker prize (Bond-Booker), Barclay’s Bank (Rawlinson), the Tate, the Sugarhouse, a student night club (Satterthwaite), and graffiti on a family grave (Rawlinson). This, of course, provoked discussion around the tearing down, re-naming, re-imagining and/or recontextualising Lancaster’s built environment and material culture - furniture made form Jamaican mahogany (Rawlinson and Gillows) in particular. 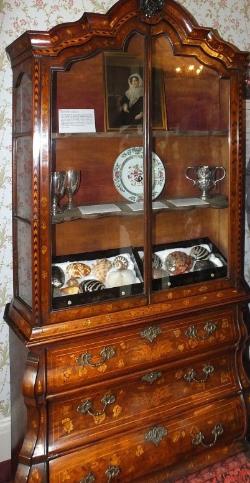 The highly decorated Jamaican mahogany cabinet featuring carving marquetry and gilding was commissioned by the Quaker, Mary Hutton Rawlinson widow of Thomas Hutton Rawlinson, the ironmaster and West Indies merchant who traded from Lancaster. Thomas was also a slave trader. (Creative Commons Attribution-Share Alike 3.0) Mahogany furniture such as this was the centre of discussions about how to ‘remember’ material culture.

Other outputs included an updated Lancaster Slave Trail, a ‘Glocal’ library collection housed at the University of Lancaster but open to the local community, and the Slave Family Trees Banner. This was co-produced Black history of extremely high quality, and conducted in a truly-collaborative and sensitive manner. This was a fascinating and inspiring day, and I hope to put some of the lessons I learned into practise as CSIS starts out on its own new community projects.

To find out more about the project visit https://www.lancasterslaveryfamilytrees.com/