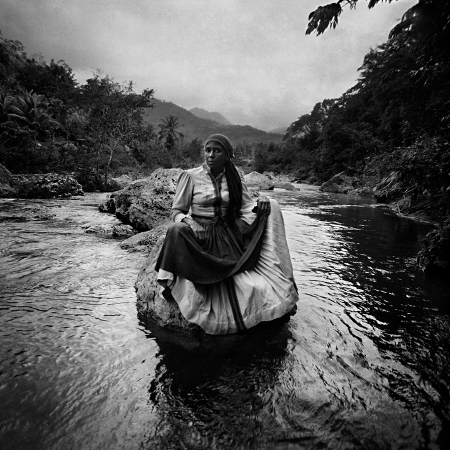 Renée Cox is a Jamaican-American artist, photographer, curator, actress and political activist who tackles issues of sexism and racism through self-portraits often taking on alter-egos her most well-known being Raje and Yo Mamma. She uses her own body, often naked, as a demonstration of self-love and empowerment. These images have been considered both extremely important and controversial particularly so is her piece, ‘Yo Mamma’s Last Supper’.

Born October 6th,1960 in Jamaica, Cox’s family moved to Queens, New York when she was aged 3 months and then into the Scarsdale area when she was 14. Here the family was one of only seven black families in the area. She sees this as an important part of her identity stating,  “I’m coming out of a privileged suburb and I’m black and I’m proud. Can you deal with it? Know what I’m saying? A lot of people don’t want to hear that.They want to hear: “I’m from the projects and I’ve had a tough life.” That’s not my story. I don’t intend to apologize for that.” She attended Syracuse University and majored in Film Studies and went on to become a professional fashion photographer. It was not until the birth of Cox’s first son in the early 1990s that she began concentrating fully on creating artworks. At the School of Visual Arts in New York she received her Master of Fine Arts degree and, following this, became part of the Whitney Independent Study program.

Cox’s work has been involved in many group exhibitions in locations including the Whitney Museum of American Art and the New Museum of Contemporary Art. In 1996 she curated the show No Doubt  shown at the Aldrich Museum. Cox has four solo exhibitions to her name: Raje: A Superhero: The Beginning of a Bold New Era, Cristinerose Gallery 1996; Peoples Project 2000, Ambrosino Gallery 2000; Renee Cox: American Family, Robert Miller Gallery 2001 and; Renee Cox: Queen Nanny of the Maroons also at the  Miller Gallery 2005.

The motivations behind her art are clear; to change how black people and in particular black women are represented in culture, and in doing so, to empower them. The way she describes the current situation is that “slavery stripped black men and women of their dignity and identity and that history continues to have an adverse affect on the African American psyche.” To achieve her aim of changing this situation Cox turns stereotypes on their head, shocks the viewer and challenges cultural assumptions. The boldness of her work is central to empowering the minorities she represents.

‘Raje’ is the super-hero persona Cox has used, an explicit and direct method by which she confronts stereotypical images, by literally fighting them. In the piece Liberation of Lady J and U.B Raje pulls muscular, attractive figures from the stereotypical images of Aunt Jemima and Uncle Ben packages. The large smiling woman in an apron and old man are transformed into statuesque figures, also in superhero costume. The stereotypes of Mammy and Tom are replaced by images of perfection. Is Cox liberating stereotypes or replacing them with another extreme?

Cox also challenged traditional views of Western art history, where there is little acknowledgment of black people, in her photographic series Flipping the Script. To do this she replaces white figures with black characters in traditional images. For example she famously used her nude self as a representation of Jesus in her piece ‘Yo Mamma’s Last Supper’ which mirrors Leonardo da Vinci’s ‘The Last Supper’. The disciples are all black except Judas, who is white. Presenting the betrayer character as white and all else as black she subverts the associations of black with bad and white with good. This outraged the Catholic Church and provoked a strong reaction from Rudy Giuliani, Mayor of New York from 1994 – 2001, who wanted to prevent this and other such images which he felt were controversial from being shown in publically funded galleries. Cox’s response was: ... read more