Siara Fabbri, along with a Post Doctoral researcher and Professor from the ALPHA Experiment, showcased how the antimatter experiments are impacting the public in terms of economics, culture, knowledge, and people at EPSRC Impact Event 2019. The event took place on 6th of December 2019 at the Institute of Physics in London, UK. Their group demonstrated advanced outreach tools pertaining to antimatter physics, as well as posters on antimatter physics and outreach by the antimatter community. 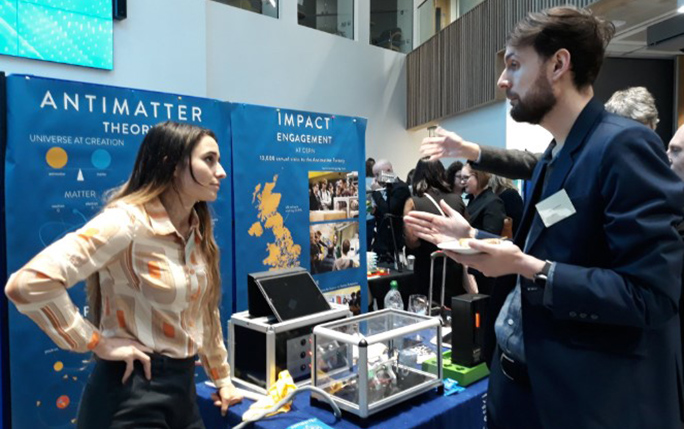 As the coordinator for her group’s representation at this event, Siara was in charge of creating the posters and brochures regarding outreach and education on antimatter science, along with attending weekly meetings leading up to the event. She also has spent a lot of time contributing to upgrades to one of the two demonstrations, a particle trap, which she had already previously demonstrated earlier on in the year at the Accelerators for Science and Society Symposium co-organised by AVA.

Top down view of the tree sap particles trapped in the particle trap and illuminated by a green laser.

The event was a huge success, and several pictures and videos of the antimatter group’s particle trap were tweeted, such as this video of Siara demonstrating the particle trap: https://twitter.com/redOX_KCL/status/1202956195532808199