The spring of 2019 kept our AVA Fellow Amit Nanda occupied with his secondment at CERN. Together with Dr. Fritz Caspers from CERN, he worked on the design of a broadband microwave device which can be integrated into a Ramsey type spectrometer for measuring the ground state hyperfine splitting of hydrogen.

An image of the cross section of the geometry of the stripline structure that Amit studied using COMSOL simulations is shown in the image below. The device consists of a 100 mm vacuum chamber housing a pair of electrodes. These would be further coupled to RF feedthroughs and excited with TEM waves. The device would be operated in differential mode, meaning the two stripline electrodes would be excited with a phase of pi w.r.t each other. 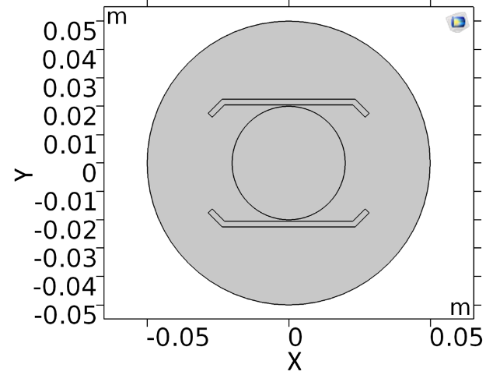 During his secondment, Amit studied simulations of such structures by varying the parameters of the electrodes, namely, width (W), thickness (T), distance between them (D) and the width of the wings (Wwing) adjacent to it. In the simulations he used the mirror symmetry of the problem and used only half the structure to study its electrostatic properties. The electric field pattern resulting from such a simulation W = 5 cm, D = 4.1 cm, T = 0.2 cm and Wwing = 0.7 cm is shown in the image below. By the end of he was able to figure out the optimum geometry of a stripline structure which would have an impedance of 50 Ω. The circular boundary between the striplines represents the area of interest where the hydrogen beam will be present. For the set of dimensions described earlier, the electric field inhomogeneity (standard deviation/ average of the electric field norm) in this region was less than 1%. 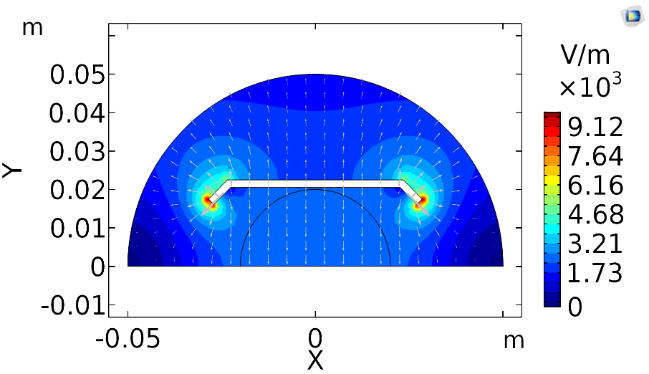 Through his secondment, Amit was very happy to benefit from the expertise of Dr. Caspers on RF structures. The simulations which he did during his stay at CERN would help him build the microwave device optimum for the hyperfine spectroscopy of hydrogen.