Proton torpedoes, hyperspace, and the Force – is this science fact or science fiction? Building up on the great success of previous events, hundreds of local high school students, university students and staff are coming to our campus today to learn how the world of Star Wars is connected with ongoing research activities in our Department of Physics.

Science often follows art, and with Star Wars: The Rise of Skywalker soon to hit the big screens, Professor Carsten Welsch, Head of Physics, saw an opportunity to show how discovery science can shape the future.

“Most people would recognise a lightsabre from Star Wars,” says Professor Welsch, “so with the imminent release of The Rise of Skywalker, we thought there would be no better way to share our work in accelerator science than setting it against iconic scenes from the films to highlight its future potential.”

The Physics of Star Wars event takes place in the award-winning Central Teaching Laboratory, which was turned into a teaching space from a galaxy far, far away. An engaging lecture by Professor Welsch introduces all participants to the world of Star Wars, whilst a range of Star Wars-themed hands-on experiments that were prepared by staff and students of Liverpool University give opportunities to experience accelerator science up-close.

In the very first Star Wars movie, Luke Skywalker uses proton torpedoes to destroy the Death Star – the giant space station that destroys planets. More than 40 years on, science fact has caught up with science fiction. Within the EU-funded Optimisation of Medical Accelerators (OMA) project, accelerator and clinical experts have been exploring ways to better control proton beams to improve cancer treatment. These beams can be used to destroy a tumour hidden deep inside the body. Liverpool research targets the use of a monitor originally developed for the Large Hadron Collider (LHC) at CERN to characterize the treatment beam without touching it. 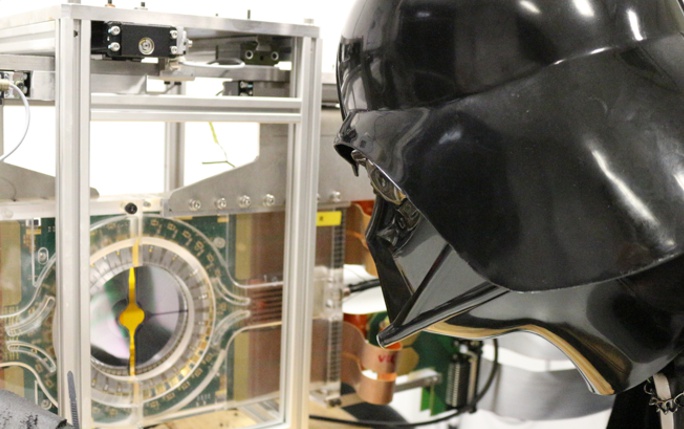 Professor Welsch says: “For the students to experience for themselves the problems of controlling a beam you can’t see to hit an invisible target, OMA Fellows have created a Star Wars themed proton mini golf challenge. They experience first-hand that targeting becomes much easier if an advanced detector helps them guide the “beam”, i.e. the mini golf ball.”

Dark Side vs Light Side

Just like the imbalance between the Light Side and the Dark Side, scientists within the Accelerators Validating Antimatter physics (AVA) Marie Skłodowska-Curie innovative training network are trying to solve the question of why there is an imbalance between matter and antimatter in the universe. Why the universe we see today is made entirely out of matter, remains one of the greatest mysteries of modern physics. The event participants learn about how antimatter particles are trapped and prepared for precision experiments via optical and mechanical Paul traps. 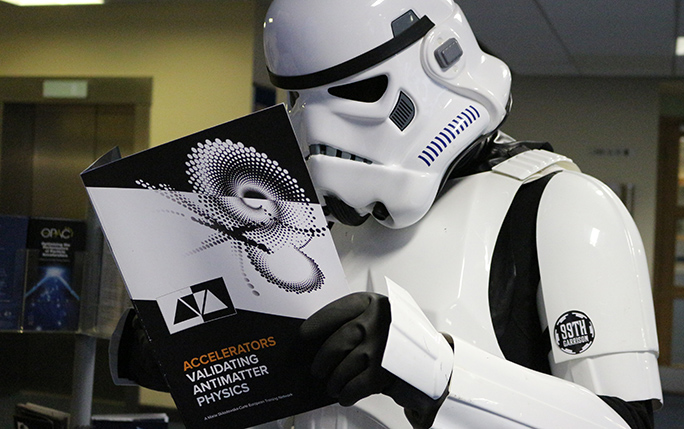 They are also shown how particle accelerators are used to produce antimatter in a laboratory environment and how this allows probing the fundamental laws of nature. The AVA Fellows explain how they study the detailed properties of these exotic particles, for example how they react to the gravitational field of the Earth and how they interact with matter particles.

In Star Wars, space ships travel long distances by jumping into Hyperspace. This requires them to undergo extreme acceleration. The Millennium Falcon, the “fastest hunk of junk in the galaxy”, has managed to do the “Kessel Run in less than 12 parsecs” Han Solo claims – but how fast can we really accelerate?

In particle accelerators, the achievable accelerating gradient determines the maximum energy of the beam that can be reached. The most advanced ways of acceleration use plasmas and are studied for example in the EuPRAXIA and AWAKE projects. They aim to increase this gradient by up to a factor of 1,000. This would help reduce the size and costs of future accelerators considerably and this would give access to entirely new medical, security and environmental applications. The computer game Surfatron helps understand how charged particles can “ride” the electric field wave and gain energy. They have to find the optimum acceleration parameters and are competing for the maximum energy gain. 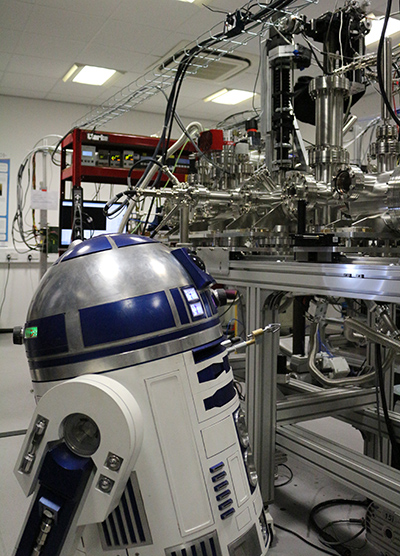 Liverpool research targets the development of a gas jet-based beam monitor that can measure the beam’s properties even at top energy. This new diagnostic has been developed in collaboration with CERN and GSI, and tested at the Cockcroft Institute, based on the campus of Daresbury Laboratory. Accelerator science is an area that relies heavily on international collaboration to push the boundaries of knowledge and technologies.

The operation of such monitors creates huge amounts of data and the analysis of this data poses significant challenges. Machine learning techniques are used to understand the underpinning physics better and an introduction to coding with the help of LEGO and Sphero Star Wars droids is also part of the Physics of Star Wars event.

Current technology does not allow us to build droids such as R2D2 or C3PO yet, but new initiatives such as the Centre for Doctoral Training in Big Data Science LIV.DAT will bring these technologies ever closer.

Prof Welsch comments: “As the voice-over of Luke Skywalker says in the latest film trailer, ‘We’ve passed on all we know’, and that’s exactly what we’re hoping our Physics of Star Wars event will do: help inspire the next generation of scientists and researchers to dream about what they might be explaining to others in 40 years’ time!”