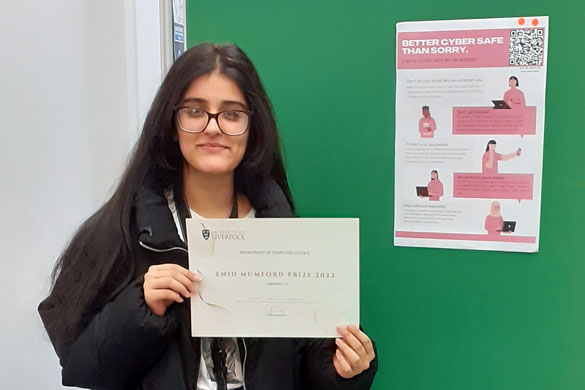 Congratulations to Computer Science student, Navinder Waraich, who has recently been presented with the University of Liverpool’s Enid Mumford Prize for her contribution to promoting ethical practices in system design.

Navinder is only the second winner of the Enid Mumford Prize, which is awarded annually to one student from the Department of Computer Science taking the Designing Systems for the Digital Society course.

Professor Enid Mumford was a Computer Scientist and Sociologist, who was particularly recognised for her work on human factors in Information System design.

Dr Floriana Grasso, the module coordinator, said she "is delighted to now have an award named after a woman who achieved so much in her field, and will be an inspiration to many future Computer Scientists".

The panel was formed by academics in the Department of Computer Science, representatives from Careers & Employability, and industrialists, who were attending the Cyber Security event as part of the annual Ignite your Future employability programme for Computer Science students.

Navinder was awarded the prize for her "Better Cyber Safe than Sorry" poster, and presented with a certificate and a cash reward.

Also awarded a "people's vote" prize, voted by those attending the Cyber Security event, was Toby Wright, for his poster "Bad Bitcoin", highlighting the environmental and social cost of bitcoin currency.