The BASE collaboration at CERN has reported in the journal Nature on the world's most accurate comparison between protons and antiprotons: The charge-to-mass ratios of antiprotons and protons are identical to eleven significant digits. This new measurement improves the accuracy of the previous best value by more than a factor of four. The data set, collected over a period of one and a half years, also enables a rigorous test of the weak equivalence principle, which says that matter and antimatter behave the same under gravity.

Symmetry and beauty are closely related, not only in music, art and architecture, but also in the fundamental laws of physics that describe our universe. It is in some sense ironic that we seem to owe our existence to a broken symmetry in the best fundamental theory that exists, the Standard Model (SM) of particle physics. One of the cornerstones of the SM is the charge, parity, time (CPT) reversal invariance. Applied to the equations of the SM, the CPT transformation translates matter into antimatter. As a consequence of CPT symmetry, pairs of matter and antimatter have the same masses, charges and magnetic moments, the latter two with opposite signs. Another consequence of CPT: if a particle meets its antiparticle, they annihilate to pure energy, as confirmed in numerous laboratory experiments. In this sense, the existence of our universe is by no means self-evident. We have reason to assume that in the Big Bang matter and antimatter were created in equal quantities. Why only the matter remained, that makes up our solar system and the celestial bodies in the universe, is as yet unclear.

Another hot topic in modern physics is the question of whether matter and antimatter behave the same under gravity. In their new paper, the BASE scientists compare the charge-to-mass ratios of antiprotons and protons and – as the Earth orbits the Sun – the similarity of antimatter and matter clocks. So, they investigated both questions at the same time with one measurement. 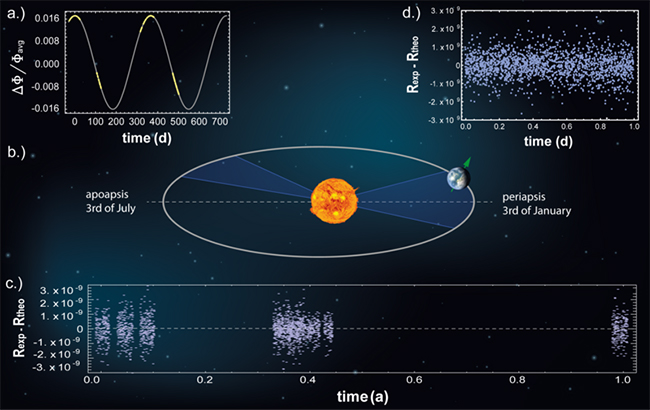 Trajectory of the earth on its orbit around the sun. a.) Variation of the gravitational potential in the BASE laboratory sourced by the elliptical orbit of the earth around the sun. The yellow scatter points represent the data-taking windows. b.) Scaled orbit, the blue shaded areas indicate the trajectorial fraction covered by the measurement reported here. c.) Data taken over the years and d.) enlarged during one data-taking window. Shown is the difference between the measured and expected ratio of the mass-to-charge ratios of proton and antiproton. Graphics: BASE collaboration

For their high-precision investigations, the team led by Stefan Ulmer, chief-scientist at RIKEN in Japan and spokesperson of the BASE collaboration, used a Penning trap, i.e., an electromagnetic container that can store and detect a single charged particle. A particle in such a trap oscillates at a characteristic frequency defined by its mass. “Listening” to the oscillation frequencies of antiprotons and protons in the same trap makes it possible to compare their masses. “By loading a cylindrical stack of several such Penning traps with antiprotons and negative hydrogen ions, we were able to perform a mass comparison within just four minutes, 50 times faster than previous proton/antiproton comparisons performed by other groups,” explains Stefan Ulmer. “Since our earlier measurements, we have also made substantial technical improvements to the experimental setup. This increases the stability of the experiment and reduces systematic shifts in the measured values.” With this optimised instrument, the BASE team collected a data set of around 24,000 individual frequency comparisons over the course of one and a half years. By combining all the measurement results, the researchers found that the charge-to-mass ratio of antiprotons and protons is identical, with an accuracy of 16 parts in a trillion, a number with 11 significant digits. This improves the accuracy of the best measurement to date – also from BASE – by more than a factor of four: a significant advance in precision physics.

A particle oscillating in a Penning trap can be considered a “clock”, an antiparticle an “anti-clock”. In the case of strong gravity, the clocks go slower. During the long-term measurement of one and a half years, the Earth, on its elliptical orbit, was exposed to the varying gravitational pull from the Sun. If antimatter and matter reacted differently to gravity, the matter and antimatter clocks would experience different frequency shifts along the Earth's trajectory. However, within the uncertainty of the measurement, the BASE scientists were unable to detect any such frequency anomaly when analysing their data. Thus, for the first time, they were able to set direct and largely model-independent limits for anomalous behaviour of antimatter under gravity – or, in other words, confirmed the validity of the weak equivalence principle for clocks within the limits of measurement accuracy.

To be able to measure with even higher precision, the antiprotons must be moved from the accelerator environment of CERN’s antimatter factory to a calm laboratory. For this purpose, the BASE collaboration is currently constructing the transportable antiproton trap BASE-STEP. The current plan is to move the antiprotons to a different laboratory at CERN, and later also to other precision laboratories. The improved measurement conditions will enhance the fractional precision further and hopefully contribute to our understanding of the imbalance between matter and antimatter. 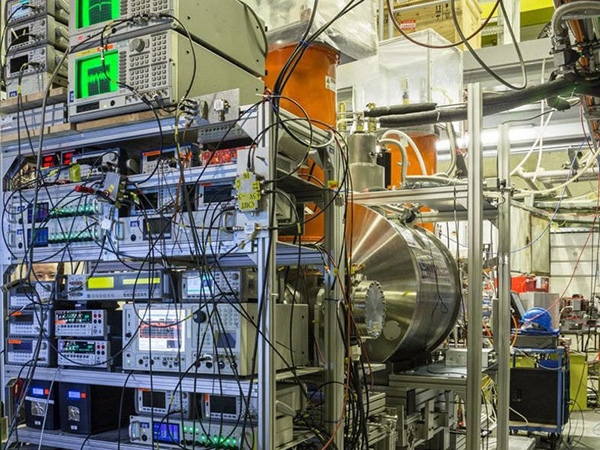 The BASE experiment at the antiproton decelerator at CERN in Geneva: You can see the control periphery, the superconducting magnet containing the Penning trap, and the antiproton transfer beamline. Photo: Stefan Sellner, RIKEN/BASE

Work carried out at the BASE experiment has contributed to the ‘Antimatter Experiments’ work package of the AVA project and co-author Markus Wiesinger was an AVA fellow.

This article is based on an original article published on the Max-Planck-Institut website which can be found here: