AVA fellows based at University of Liverpool participated in organization of international Symposium Particle Colliders Accelerating Innovation which was held on 22 March 2019 at the Liverpool Arena and Convention Centre. The event showcased the science and technology opportunities related to the Future Circular Collider (FCC) study, a potential £20billion successor to the Large Hadron Collider and attracted nearly 1000 delegates. 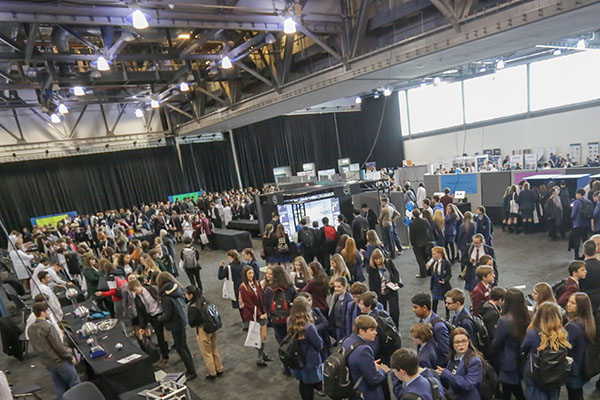 The symposium in Liverpool was live-streamed to institutions across Europe and the talks from world-leading researchers are now available to watch via the event website.

In parallel to the industry exhibition, hands-on demonstrations engaged hundreds of high school students in the technologies behind FCC.

More than a dozen different activities, each one offered several times in parallel, were available to the high school students. This included the Plasmatron, an interactive game explaining the physics behind plasma accelerators, salad bowl accelerators showing how high voltages can be generated, the augmented reality accelerator acceleratAR that turns paper cubes into components of a particle accelerator, and cryo-experiments that turned flowers into glass-like objects…which were then smashed into pieces by the children, as can be seen below. 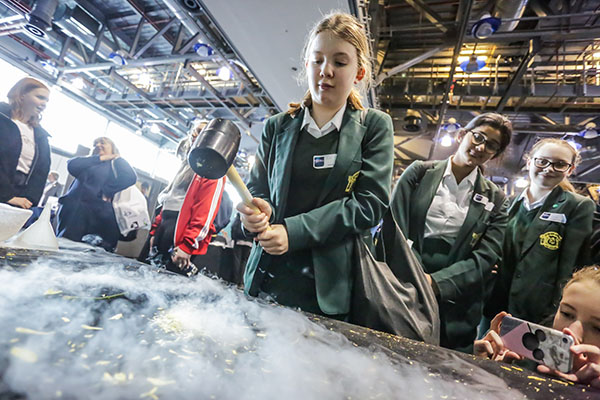 The entire hall was full of physics! AVA fellows - Bianca, Milena, Volodymyr and Bruno - have lead on one demonstration each.

Milena  introduced particle detector using the cloud chamber, whilst Bruno guided the students on the CERN’s interactive LHC tunnel which came for the first time to the UK. A true centre-piece of the hands-on physics fair, the LHC tunnel allowed children to play ‘proton football’ and smash particles at high energies. If energy and direction were well chosen, they could even create a Higgs particle! 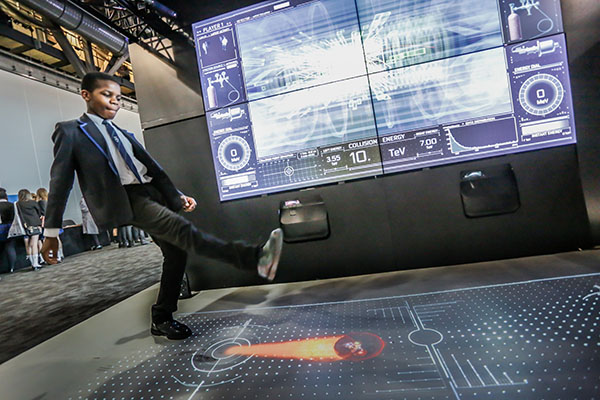 “More than hundred of childern were curious about how that works and tenths of them initialised chain of improvised accelerators by themselves. We were able to demonstrate physics effects from inside, utilising magnetic flux detectors. This idea actually caused most of the “Wow!”-s and had raised the curiosity among school teachers and coordinators because of such physics transparency “ Volodymyr described.

“Many pupils were curious how come pasta made its way into Physics Symposium. It intrigued them and they were happy to listen how I relate pasta to the Standard model theory ” described Bianca who  introduced the concept of different particles via material, which is close to her Italian roots – PASTA.