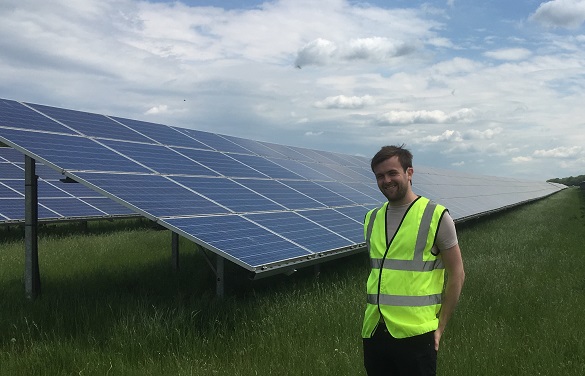 Matthew Smiles is a 4th year PhD student at the University’s Stephenson Institute for Renewable Energy. His PhD is funded by the Centre for Doctoral Training in New and Sustainable Photovoltaics and he is supervised by Professor Tim Veal.

The need to reduce and eliminate the emissions of harmful greenhouse gases such as carbon dioxide is well known. This is no small task and will involve switching the ways we heat our buildings, power our vehicles, and produce our electricity. One of the most established technologies in implementing this change is solar panels.

Almost all solar panels that you see in roofs and in fields will be silicon solar panels. These panels are already cheaper than their fossil fuel alternatives and are close to their theoretical maximum efficiency. However, a lot of research is aimed at trying to find alternative materials to use in solar panels because of two issues with silicon.

Firstly, it is (ironically) not the best material at absorbing light and so other materials could achieve higher efficiencies. And secondly the method of creating solar panels from silicon is intensive so the energy payback time, the time it takes for the energy used to make the panel to cancel out the energy generated by the panel, is around two to three years.

A lot of different materials are being investigated to try and better this. One category of materials with very high level of interest are perovskites. Perovskites have reached efficiencies close to silicon in a short space of time but have the problem that they degrade incredibly quickly when exposed to air and light, not ideal for a solar cell. One of the reasons that these materials get such high efficiencies is linked to something called the lone pair effect, which is about how the electrons within the material bond and is what leads to the water molecules characteristically bent shape.

Dr Jon Major and Professor Ken Durose’s groups in the institute are world leaders in another lone pair material, antimony selenide. Antimony selenide has also shown a rapid rise in efficiencies and doesn’t degrade when exposed to light and air, a big plus when compared with perovskites. As well as the lone pair effect, antimony selenide has an unusual structure that we call nanoribbons which, as the name suggest, are like towers of atoms stacked upright with weak bonding in between them. This means electricity flows very well up and down the nanoribbons but not very well between them.

My project builds on these two important findings, the lone pair effect and the unusual structure. I have spent my PhD studying the related material series called germanium sulfur selenide. In this series the end points are germanium sulfide and germanium selenide with the full series involved different ratios of sulfur and selenium. The structure is similar to the antimony selenide series with one small difference, instead of nanoribbons they form nanosheets. Therefore, the electricity should flow well in two directions rather than one which should be good for solar applications.

One of my projects showed that the endpoints have the lone pair effect, which hadn’t been confirmed previously. Another part of my project has shown that the previously accepted wavelength of light when germanium selenide begins absorbing is incorrect and is actually much closer to the ideal value for a solar application, giving it an advantage over silicon. A third aspect I have worked on is showing how the thermal properties, structure, and wavelength of light absorbed as you go from one end point of the series to the other.

Alongside my research I have had a few other exciting opportunities during my PhD. Firstly, as part of the CDT-PV I got to spend two weeks in 6 other universities (Cambridge, Sheffield, Oxford, Bath, Southampton, and Loughborough) which involved getting training about all the different areas of solar research going on in the UK. Collaborating with other CDT PhD students, I was recently first author of a paper about modelling a solar panel system on the Bath Abbey roof. We used the results to show that it would be financially beneficial for the Abbey to install the solar panels on the roof. Excitingly, the story picked up some press coverage which included me being quoted in the Mail Online who debated whether solar panels should be placed on such a historic building.

On top of that I have become an ambassador for the charity STEM learning. The aim of the charity is to encourage STEM education, mainly with young people. One highlight from my time as a STEM ambassador has been speaking at the virtual event ‘STEMfest in space’. I gave a talk about solar panels in space and explained why they are so useful up there and how, without the space industry, the solar industry on Earth would never have “taken off!” The overall event was attended by over 10,000 students with some of the other speakers including an astronaut (who I suspect was a bit more popular than me).

Finally, since October 2020 I have been the sustainability intern at a Lancashire based company called Crowberry Consulting as part of the Liverpool Doctoral College Postgraduate Researcher Placement Scheme. Some of the work I have done has included calculating carbon footprints for businesses, writing educational articles about going green, helping to write grants for funding for low carbon technologies, and helping firms achieve international recognition of achieving carbon neutrality with a standard called the PAS 2060.

In the next few months, I will be writing my thesis to complete my PhD. Afterwards, I want to work in an industry that allows me to continue to be involved in society’s ongoing decarbonisation efforts.