University of Liverpool physicists Professor Gianluigi Casse and Dr Jon Taylor developed a proof-of-concept water phantom with pixel detectors that could be applied in medical devices and diagnostics, bringing it closer to full commercialisation.

This outcomes of this project have just been published in a special brochure on STFC Impact Acceleration Account (IAA) success stories which is available here.

Imaging phantoms are used as stand-in for human tissue in medical physics to ensure that imaging equipment is working correctly and to undertake quality control. The additional funding that was provided by the STFC IAA enabled the development of further enhancements to the water phantom that was originally developed in collaboration with Rutherford Cancer Centres and Rutherford Diagnostics.

The project is a good example of technology transfer from fundamental science to healthcare applications in the Department of Physics: It brings together technology developed for High Energy Physics (Timepix3) and sensors designed at Liverpool for the LHCb experiment at CERN. These sensors were manufactured by Micron Semiconductor Ltd.

Rutherford Cancer Centres in the UK provided the clinical beams of protons to carry out experimental tests.  The project also connects to a number of wider R&D studies in the department and capitalises on existing national and international networks coordinated by Liverpool experts, such as the STFC Cancer Diagnosis Network+ and the pan-European OMA network.

The project enhancements to the monitors allowed additional detectors to be added that provide accurate calibration of dose to water for clinical beams, allowing realistic clinical fluences to be used with the device during measurements.

Additional parts for sensing of neutrons in clinical environments were also added to measure the neutron flux generated by clinical beams with greater precision than is currently available.

Below is a selection of images showing the Timepix3 water phantom system and measurements made on a clinical proton beam of 200 MeV. The measurements show the central core of the beam and the ‘halo’ structure surrounding this. 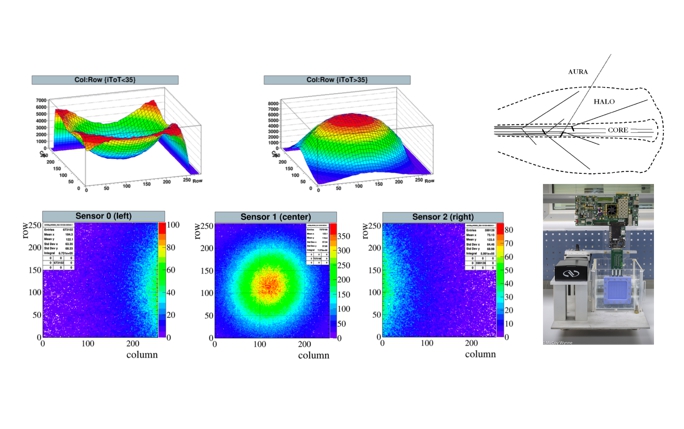 Selection of images showing the Timepix3 water phantom system and measurements made on a clinical proton beam of 200 MeV. (copyright: University of Liverpool, McCoy Wynne)

Planned future developments include the design and fabrication of a new HV-CMOS detector with features that are optimised for data taking in a clinical proton beam. The new detector will also be tested in other types of clinical beams e.g. FLASH radiotherapy where the dose rate compared with conventional radiotherapy is extremely high and also carbon ion therapy where the LET is much higher than in proton therapy. Tests are also planned in X-ray and electron radiotherapy beams where the depth-dose of the treatment beams is very different.

The project was supported by the STFC Impact Acceleration Account (IAA) funding and forms part of a wider portfolio of initiatives and projects within the Department of Physics to develop innovative healthcare instrumentation.